You may be tempted to fill up your plastic water bottle with all this heat. According to nutritionists, this gesture should be avoided.

It is enticing, if not obvious, to reuse your water bottle when you're at the beach, in a park, or in the forest. a behavior that is environmentally friendly but studies show to be unhealthy for your health.

It is a known fact that bottled water contains a large number of microplastics. However, the process of molecular exchanges is multiplied by ten during hotter periods. Chemical leaching occurs when the chemicals in the plastic bottle mix with the liquid more quickly.

In a Chinese study, water bottles were kept for four weeks at temperatures as high as 158 degrees Fahrenheit (74 degrees) to illustrate the impact of heat on PET water bottles (the plastic most frequently used to make disposable water bottles.

BPA and antimony, a carcinogen similar to arsenic, had consequently gradually increased in concentrations.

Additionally, the water's quality will only decline after the bottle is opened.

Another issue is the growth of bacteria inside the bottle over time. Indeed, the germs spread quickly when you open it and reseal it. The same holds true when the mouth makes contact with the neck.

And in this case, strong heat is not necessary because even a drink that is left at room temperature can become infected.

The nutritionist  says that drinking tap water stored in a stainless steel or glass gourd is the best choice for staying hydrated risk-free because "bottled water is not spared contaminants.

The expert also discourages using the water purifier or filter jug because it might contain potentially harmful silver nanoparticles. These would, in fact, inhibit the growth and reproduction of both aquatic and terrestrial organisms while promoting their mortality.

at June 29, 2022 No comments:
Email ThisBlogThis!Share to TwitterShare to FacebookShare to Pinterest
Labels: Health

Samsung  hasn't even put its 200 megapixel first-generation camera in a phone yet. It is ISOCELL HP3, and it is very different from ISOCELL HP1, its predecessor.

The first-generation 200MP camera is smaller than the ISOCELL HP3. Each of the 200 million pixels is now 0.56 micrometers (m) instead of the previous 0.64 m. It would have the tiniest pixels ever used in a phone. The optical size of each pixel is 1/1.4 inch, which is 14% smaller than the original.

The original lens could capture images with a resolution of 16,384 x 12,288 and 200 million pixels. It's unclear how that functions with the new camera, but it might use 2x2 or 4x4 pixel binning. It combines pixels and performs well in low-light conditions because more light is absorbed.

Samsung does claim that the ISOCELL HP3 can record videos in 8K resolution and at a frame rate of 30. 4K videos can even reach 120 frames per second. It utilizes Super QPD autofocus, which provides a more precise and rapid autofocus. Additionally, the color depth would be improved (14-bit color depth for more than four trillion colors). The camera will enter production this year, but the exact release date and phone models are unknown. They are also not very useful in many mobile phones, as the pixels are already reduced in size. Motorola introduced the same camera model in May.

There have been rumors that the new Galaxy S23 series will include this camera next year. The camera will most likely be exclusive to the Ultra, the most expensive device. In the coming months, we may hear more about this camera, particularly its applications.

at June 26, 2022 No comments:
Email ThisBlogThis!Share to TwitterShare to FacebookShare to Pinterest
Labels: Cameras, Smartphones

The LG UHD TV (UN7070): The best Smart TV for entertainment and gaming

Show off all of your entertainment. The LG UHD TV (UN7070), which comes in a range of sizes, is designed with genuine 4K displays for four times the resolution of standard TV. Its processor improves color, contrast, clarity, and detail, and its compatibility with Google Home and Alexa makes voice control simple.

With a quad-core 4K processor driving this 70-inch TV, noise in videos is eliminated, resulting in vivid colors and contrasts. Low-resolution images are also processed and reproduced with a quality that is as close to 4K as is possible.

The LG TV provides the Filmmaker Mode to accurately replicate the colors and tones used in the recording of the movie, as well as the Game Optimizer, which has all the settings specific to gaming.

It features Auto Low Latency Mode (ALLM).You can see the action in almost real time thanks to the incredibly low input lag*. Now you have the advantage—especially in multiplayer games—to react to the action as it develops and ahead of your competitors.

The webOS 6.0 operating system, which provides access to the most well-known services like Netflix, NOW TV, Prime video, YouTube, RaiPlay, DAZN, Disney +, Rakuten TV, and Apple tv, is present on board. This allows users to enjoy multimedia and the possibility of enjoying streaming and on-demand content. It can also be controlled using the Google Assistant and Alexa voice assistants .

There is a pointer on the remote control, which is useful for quickly navigating the menus.

at June 26, 2022 No comments:
Email ThisBlogThis!Share to TwitterShare to FacebookShare to Pinterest
Labels: Smart TV

What Does DCI-P3 Color Mean?

It is a color scheme created by the Society of Motion Picture and Television Engineers (SMPTE) and Digital Cinema Initiatives (DCI) to standardize the colors used in the film and television industries.

A version of the DCI-P3 color space known as DCI-P3-D65 is also used by high-end PC monitors, TVs, and smartphone displays; however, you'll typically see this written as DCI-P3.

When purchasing a PC monitor, TV, or other device, the vendor may state that the item offers a particular proportion of DCI-P3 or P3 color space. The monitor can reproduce as much of the DCI-P3 space as shown here, though it needs to be tested to determine whether it does so accurately.

True DCI-P3 is aimed at what you see in theaters because this is a DCI standard. In home products, you'll typically find DCI-P3-D65, but, once more, it's almost always listed as DCI-P3, leaving out the D65 part. The difference between true DCI-P3 and DCI-P3-D65 is in the white. Due to its preference for projection systems, true DCI-P3 has a greener white.

As most 4K and even 8K monitors typically include the color wheel over the marginally outmoded sRGB color spectrum, DCI-P3 is particularly well suited for contemporary ultra-HD visuals.

DCI-P3 is undoubtedly preferable to sRGB if you want to fully enjoy HDR, and the more DCI-P3 coverage there is, the better. You can then take advantage of the additional colors that HDR content can have.

at June 24, 2022 No comments:
Email ThisBlogThis!Share to TwitterShare to FacebookShare to Pinterest
Labels: DCI-P3, Smartphones

What is Xiaomi’s Loop LiquidCool technology?

Every year, the power of smartphone chipsets increases, but they also get hotter due to the development of silicon chips.

Vapour chambers, also known as heat pipes, are a common part of the cooling stack as a result of the growing importance of cooling solutions.

What is the mechanism? (look at the chart above). The Evaporator segment, which is heated by the chipset, causes liquid to evaporate. The hot gas that results travels down a pipe to the Condenser, where it is cooled (for instance, by using the metal frame as a heat sink) and condensed back into liquid. The cycle is then restarted by sending this liquid to the Refill chamber, which feeds the Evaporator.

This is similar to what happens in a typical heat pipe, but there are important differences, as was already mentioned. First, the hot gas and cold liquid are maintained distinct. In heat pipes, the contact between the wick that carries the liquid and the chamber that the gas passes through limits the efficiency of the device.

The use of Tesla valves to guarantee proper circulation is the second significant change. These valves, which are easily identified by the string of teardrop shapes, were created by that Tesla inventor and do not use any moving parts to ensure that liquid flows much more easily in one direction than the other.

Nobel Prize winner: The worst things in the world are made by men seduced by the macho myth

Tawakkol Karman (Yemen), Leymah Gbowee (Liberia), and Jody Williams (United States) are touring Poland and Ukraine to support displaced women from Ukraine and recognize their life-saving work, engage communities that have assisted refugees, and determine what can be done for women's organizations and networks in both countries. 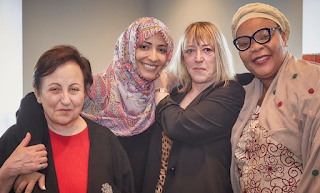 At each stage of their journey, the winners asked how decision-makers can ensure that the voices of women affected by armed conflicts are heard. They want to know how to better respond to the gender effects of conflicts and, in this case, the Russian military invasion of Ukraine.

Nobel laureates will visit refugee centers in Kraków and Rzeszów, as well as the offices of international humanitarian organizations, and meet with local activists and officials.

at June 22, 2022 No comments:
Email ThisBlogThis!Share to TwitterShare to FacebookShare to Pinterest
Labels: World

Your risk of breast cancer could go up to 20% if you consume these foods.

If you are a woman who has passed menopause and your diet consists of unhealthy, highly processed foods, potatoes, sweet drinks, and refined grains devoid of fiber and essential nutrients, you may develop breast cancer.

French researchers claim that certain lifestyle factors can raise your risk of breast cancer even if you do not genetically carry the disease's associated mutations.

The majority of people underestimate the impact of their lifestyle and diet on their health. New evidence suggests that our daily diet is a major determinant of whether we contract serious diseases such as breast cancer.

The team led by Sanama Shah, a doctoral student at Paris-Saclay University, analyzed the data of over 65,000 individuals. women aged 40 to 65 who have participated in the Etude Epidémiologique aux femmes de la Mutuelle Générale de l'Education Nationale study for more than 20 years . Nearly 4,000 individuals were registered at that time. occurrences of breast cancer. The focus of research has been on determining how plant-based diets affect this disease risk in postmenopausal women.

Researchers discovered that those with the healthiest diets were less likely to develop breast cancer. What was thought to be the optimal diet for reducing the risk of this cancer? At the most recent meeting of the American Society for Nutrition, the researchers' conclusions were presented in detail.

Researchers discovered that plant-based diets can vary substantially in terms of the nutritional value of the foods consumed, so they classified them as either healthier or less healthy.

Women who regularly ate less healthy foods, such as desserts, fruit juices, and potatoes, on the other hand, had a 20% higher risk of developing breast cancer.

In both instances, such a diet may contain animal products, according to the author of a recent study. According to her, eating a healthy plant-based diet without giving up meat or animal products entirely and avoiding unhealthy, highly processed foods is beneficial to the body and can prevent the development of all types of breast cancer in postmenopausal women.