HUAWEI NOVA Y9A - THE RETURN OF THE RETRACTABLE CAMERA?

Huawei Nova Y9a is quite a surprising novelty. The smartphone appeared in South Africa , its specification is a patchwork of several other models, and the whole thing is topped with a retractable selfie camera. 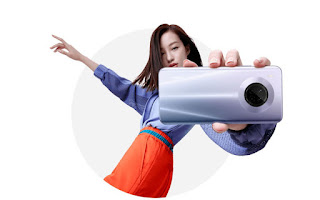 The selfie camera hidden in the booms extending from the housing was fashionable 2-3 years ago. It was quite an interesting solution, but not without its drawbacks. The cameras hidden in the casing were quite expensive to produce and prone to damage. In fact - they have been replaced by screen holes - and the Huawei Nova Y9a is probably one of the last models equipped with this element. Thanks to the retractable camera (16 Mpx, f / 2.2), the Huawei Nova Y9a boasts an almost frameless, full 6.63-inch TFT screen with Full HD + resolution.

he back of the smartphone is decorated with a round camera frame, hiding four lenses (f / 1.8 and 3x f / 2.4) and matrices of 64, 8 and two 2 Mpx each. The purpose of the additional modules is obvious: 120-degree wide-angle photos, macro and background blurring. The heart of the smartphone is the MediaTek Helio G80 processor, supported by 8 + 128 GB memory. The internal memory can be expanded with a microSD card. The smartphone will be powered by a battery with a capacity of 4300 mAh, which will be reduced to 4200 mAh in the markets of the Middle East, Africa and selected Asian countries, where - apparently - the model in question is also to come. The battery will be charged with a power of 40 W. As a system - Android 11 with the EMUI 10.1 interface - but of course without Google.

at January 31, 2022
Email ThisBlogThis!Share to TwitterShare to FacebookShare to Pinterest
Labels: Smartphones