Simone Ashley is the star of Season 2 of The Bridgertons. You know her well from another Netflix hit

Simone Ashley made her debut only in the 2nd season of the Netflix hit "Bridgertons" - she played the feisty Kata Sharma, the beloved of Anthony Bridgerton. The British actress, however, immediately won the sympathy and even adoration of the fans. Netflix viewers are no strangers to Ashley - he is playing another big hit on the platform. Who is Simone Ashley? 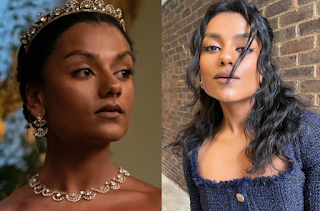 "The Bridgertons ," a costume series based on Julia Quinn's best-selling novels , is a Netflix hit with new episodes. Despite the absence of Regé-Jean Page as Prince Hastings , Season 2 of "The Bridgertons" , which premiered on March 25, is a huge success again - the series produced by the American television queen Shonda Rhimes ("The Surgeons", "Scandal", "The Way to murder ") is once again the international hit of Netflix. 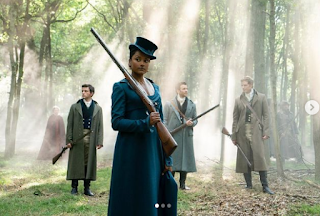 Loyal fans of the series were thrilled and warmed by the love story of Anthony Bridgerton (Daphne's brother from Season 1, played by Jonathan Bailey ) and Kate Sharma ( Simone Ashley ), who went from ferocious enemies to passionate lovers. Although we know Bailey from last season, Ashley is the new face of "Bridgertons". Who is the actress who delighted the viewers of the costume blockbuster?
Read also: It was supposed to be sexy, but it turned out caricatured. The second season of "Bridgertons", however, will be appreciated by loyal fans
Simone Ashley: Age and Origin
Simone Ashley, 27, was born on March 30, 1995 in Camberley, Surrey, England, about 50 kilometers from the center of London. The British actress's real name is Simone Ashwini Pillai, and her name is Ashley professionally.
Simone's parents come from Sri Lanka and are of Tamil nationality - the Tamils ​​are a nation that has its own language and writing, and lives mainly in the state of Tamil Nadu in India and the northeastern part of Sri Lanka. The Bridgerton star also has an older brother.
Ashley loved the arts from an early age. She attended ArtsEd School in Chiswick, where she developed her acting skills. As she admitted in an interview in "Vogue", she differs from her family, which had an academic background. - I was the only non-academic in my family. My strengths were music, film, photography and art - she said.
The actress plays the piano and loves to sing - she loves both opera and musicals. - Growing up, I sang a lot and studied classical music, which then led me to musical theater. I fell in love with musicals - she told People magazine.
As Simone Ashley admitted, her parents - despite supporting her - were not very happy with their daughter's career choice. - They still find it quite scary and disturbing. It is impossible to predict the future, there is no security, no guarantees. And this can be the worst nightmare of parents - she said in one of the interviews. - But they know that I am a wise woman. You cannot spend your life following what your parents, friends, teachers or partners want, the British added.
Simone Ashley: "Sex Education"
Ahead of "The Bridgertons," Simone Ashley gained popularity in another Netflix hit, "Sex Education,"  which premiered in 2019. Olivia Hanan , the best friend of Ruby Matthews and Anwar Bakshi, played in the show in three seasons .
- "Sex Education" really changed my life. I am very grateful for this series. I have learned so much in my profession and as a person. It was a great joy - said Simone Ashley about "Sex Education" in an interview with "Vogue" magazine. Ashley is unlikely to appear in season 4 of the series, however. - I think my time in this series is over. It's very sad because I love them so much - she revealed in an interview in "Glamor".
"Sex Education" was a breakthrough in the career of Simone Ashley, who, thanks to the "Bridgertons", is sure to get off the hook. However, the 27-year-old also has several films and a dozen serials in her filmography. On British television, she appeared in the crime hit "Broadchurch" , the series "Strike" based on the novels of JK Rowling written under the pseudonym Robert Galbraith or in the psychological thriller "The Sister".
On the big screen, Ashley, in turn, played, among others in the comedy thriller "Kill Ben Lyk" or the Hollywood blockbuster "Pokémon: Detective Pikachu". According to the magazine "Variety", the Briton also has an uncredited role in the musical film "Straight Outta Compton" about the famous hip-hop group "NWA". In 2016, the title was nominated for an Oscar in the Best Original Screenplay category.
Ashley is not going to rest on his laurels. It is not known yet officially whether he will return in the next season of "Bridgertons", but he already has further professional plans. In 2023, he will appear in the next acting version of the Disney animation - "The Little Mermaid" with Halle Bailey . However, it is not known what character he will play.
Simone Ashley: boyfriend, Instagram
What do we know about Simone Ashley's private life? In an interview with "Glamor", in which the actress promoted "Bridgertons", she confessed that she is currently single. She also revealed that she dreams of starting her own family in the future. "I think it would make me feel at home," she said.
Simone Ashley on Instagram ( @simoneasshley ) shares photos from her photoshoots and productions, as well as from everyday life. Privately, the actress loves music and art, as well as spending time outdoors. - I am a huge fan of nature. I love swimming. I love hiking, going to the beach, very good food - she enumerated in one of the interviews.
Simone Ashley on Discrimination
Ashley also openly talks about and publicly opposes skin color discrimination in the entertainment industry. - Every day I try to be as optimistic as I can and I also try to be like that in my approach to the industry. Yes, colorism is an ongoing problem. So is being cast for type (beauty), being disregarded for skin color, losing a role to girls with whom "target audiences and markets can relate more," said Simone Ashley.
She also emphasized that she intends to fight against colorism herself. - If I gave up on this, where would I go? Nowhere! Fuck it! - said the actress.
at March 31, 2022
Email ThisBlogThis!Share to TwitterShare to FacebookShare to Pinterest
Labels: Netflix