The low-earth orbit radio technology was already expected for the iPhone. It is coming to Apple Smartwatches.

A feature that was expected for Apple smartphones before the iPhone 13 came out is now set to come to the Apple Watch. This is reported by the financial news agency Bloomberg . The plan is for the computer watch to be able to make emergency calls even when there is no mobile phone reception - using so-called low-earth orbit satellite radio technology, or LEO for short, with which satellites in low earth orbit can be reached. 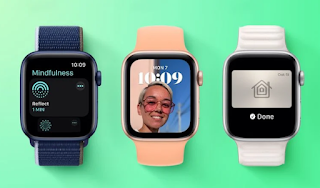 The feature would complement the emergency call SOS function already present on the smartwatch, which uses the LTE network. The device can automatically detect when a person has fallen - and then contact the authorities. Alternatively, emergency SOS can also be activated manually. With LEO, a significantly wider range for the function would be implemented, for example at sea or in the mountains. A transmission of the current location is planned.

According to the report , the Watch should receive the function in the foreseeable future . However, it could be that the iPhone will initially lead the way here – allegedly already this year, writes Bloomberg .

Already planned for the iPhone 13

Last year there were credible-sounding reports that Apple is planning to install LEO technology in the iPhone 13 . At first it was said that the function was intended for iMessage, but later the information focused on a possible emergency call service. When the new model was introduced, the feature was missing.

Supposedly it is planned to offer an "Emergency Message via Contacts" function. In doing so, the iPhone would query what type of emergency occurred - such as vehicle, boat, plane or fire. Further details would then be queried and the data would then be transmitted to an emergency service – including the position. For implementation, both the watch and the smartphone need suitable basebands including antennas for the LEO satellites.

at April 16, 2022
Email ThisBlogThis!Share to TwitterShare to FacebookShare to Pinterest
Labels: Apple, Smartwatches