Netflix. Robbie Amell in the third season of "The Witcher". There are also other new actors 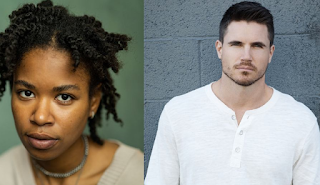 Robbie Amell is the cousin of actor Stephen Amell, who is known among others . from the title role in the series " Arrow ". Robbie has made such productions as "Upload", "Code 8", "Resident Evil: Welcome to Raccoon City". Meng'er Zhang was seen in Marvel's "Shang-Chi and the Legend of the Ten Rings", and Christelle Elwin in "Half Bad" and "Bloods". Hugh Skinner previously starred in "Mamma Mia Here We Go Again!" and the series "Fleabag".

at April 16, 2022
Email ThisBlogThis!Share to TwitterShare to FacebookShare to Pinterest
Labels: Movies