Sony Xperia Pro-I. A smartphone for the chosen ones 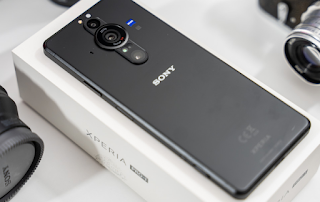 The oblong casing, although I have the impression that it is slightly wider than usual, calls us from a distance - Hey, it's me! Xperia! But up close, you can already see that the Xperia Pro-I stands out significantly from the rest of the market.
The casing is not overly thin, but it cannot be called bulky either. The metal body, covered with longitudinal grooves, stands out from the place. It strongly refers to the photographic style and looks really brilliant. In combination with the large mass of the smartphone, you get the impression that it is the fault of the body.
Another distinguishing feature are the buttons on the right side of the housing. We have standard volume control buttons and a switch with a built-in fingerprint reader. Which works poorly as a physical button, it's a bit too deep and hard to feel. Next to them we have a physical, two-stage camera shutter button and a button that turns on video recording or launches the movie application.
On the left side we have the standard Xperia distinguishing feature, i.e. a card slot that can be opened without a key. On the plus side, there is also a 3.5mm Jack socket and a hook for attaching, for example, a lanyard or other handle.
At the back we have a large, but not too much protruding camera island and an effective metal finished with matte paint.
Structurally and visually, the Xperia Pro-I can hardly be faulted. Almost, because the loudspeaker slots above and below the screen collect dust very much. This is the only drawback.
Xperia Pro-I  screen 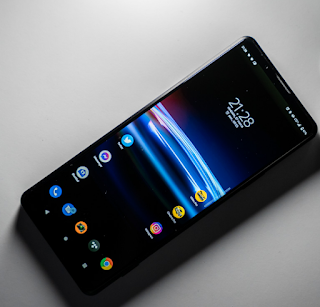 A large OLED panel with 4K resolution, 120 Hz image refreshment, HDR BT.2020 support and a few other goodies is just like taken out of Sony's flagship TV sets. In this case, the company went for quality aimed at creators, not effectiveness. The screen does not have record brightness, according to GSMAren's measurements, the maximum brightness is 644 nits. There is a lot of competition short of the results around 1000 nits.
This translates into everyday use, because the flagships of the competition actually offer better visibility in strong sunlight. The Xperia Pro-I screen is still legible, but it just sticks out a bit.
4K resolution is a bit stretched. In most activities, we only have 1096 x 2560 pixels. We will not see it with the naked eye, and therefore we do not have to charge the battery three times a day.
Xperia Pro-I is distinguished by the huge display settings. Here we have the Creator Mode, activating, among others 10-bit color palette that we can activate permanently or turn it on automatically. Next we have a very wide range of white balance and individual RGB color adjustments. Unfortunately, the refresh rate is a minus, because the 120 Hz mode can be turned on permanently, or we can rely on 60 Hz. Automatic mode could be handy. But I must admit that the difference in the refresh rate is actually visible, and it is very strong.
Overall, the Xperia Pro-I screen is really great. It is not overly saturated, over-colored and too effective. And there are not so many among smartphones, contrary to appearances.
Friendly interface and good performance
Sony has not been messing with the interface of its smartphones for a long time and it works for good. The overlay does not interfere with pure Android. It is easy to use, it allows for basic configuration, including changing the size of icons and the entire interface. Although it should be noted here that we still have Android 11 in Xperia Pro-I, not 12. In addition, the overlay could use a new incarnation, with a slightly more modern look.

Xperia Pro-I debuted in the fourth quarter of 2021, so we will find the Snapdragon 888 5G in it. Unless you measure the smartphone's usefulness with numbers in benchmarks, you will have nothing to complain about. Xperia Pro-I works perfectly. Fast, no delays or freezes. Performance is the last thing to complain about here.
Xperia Pro-I is a convenient communication tool. The speakers could use a bit more power
In terms of communication, the Xperia Pro-I is not missing anything. We have well-functioning 5G and NFC with contactless payment option. I also had no problems when pairing with headphones or watches using Bluetooth. Android Auto also works very well, wired (Opel Mokka-E) and wirelessly (BMW iX). The solid coverage of both the mobile network, including 5G, and Wi-Fi should also be praised.
You can stick to the speakers a bit. While the conversations are of very good quality and loud, it is a bit too quiet when it comes to multimedia. The sound is of good quality, the promised stereo can be felt, but a bit more power could be used. You can also add synchronized vibrations to the sounds produced. An interesting gadget, but only useful when we hold the smartphone in our hands, e.g. while playing games.
4500 mAh is surprisingly not too little battery capacity
Flagships have already accustomed us to 5000 mAh batteries. In the Xperia Pro-I we have 4500 mAh and I must admit that I expected to charge it even twice a day. But none of these things. During normal use, including a lot of photos, an hour of calls, an hour of music on the headphones, 2-3 hours of browsing the Internet and using messengers, with full synchronization of the application and active connection to the watch, in the evenings I had up to 20% of energy. This is a very good result. Activating the 120 Hz screen refresh rate does not drastically drain the battery, but at the end of the day, the charge of the cell was higher by about 10-15%.
We're all here for the camera. Is Sony Xperia Pro-I really a breakthrough?
In some respects, yes. The Xperia Pro-I camera cannot be compared with any other smartphone. By no means because of the 1-inch matrix. You have probably heard about it, as well as the fact that it is the same matrix as in the Sony RX-100 cameras. Unfortunately, not the same, but a fragment of the same matrix. 1 inch here refers to the diameter of the camera tube that would be needed to cover the sensor used. Therefore, we do not have a 1 inch (24mm) diagonal here, but 16mm. Fraud? Rather a clever understatement.
Even so, the specification of the camera is impressive. It is worth mentioning here, for example, the 315-field autofocus with phase detection and 90% frame coverage, continuous shooting at 20 frames per second, autofocus set on the eye (also of animals, in each of the three lenses), or finally the variable aperture of the main camera. Physical variable from F / 2.0 to F / 4.0 and it can be seen with the naked eye.
One can only complain about a slightly short telephoto lens. We have the equivalent of 50mm here, and it would be nice to see a periscope zoom of 120 or 240mm. Maybe someday.
In terms of the available options, it is necessary to mention the simple conversion of the smartphone into an external screen for a Sony camera. I admit that I did not check it due to the lack of a suitable cable, but I saw the Xperia Pro-I in action in this application and it works very well. Especially with this screen quality.
at April 11, 2022
Email ThisBlogThis!Share to TwitterShare to FacebookShare to Pinterest
Labels: Smartphones, Sony