The term "repellants" refers to various types of deterrents that work on specific animal species. Repellants are commonly used to repel insects such as mosquitoes and ticks. What types of repellants are there? Which of these will effectively repel ticks? We have compiled the most important repellant information. 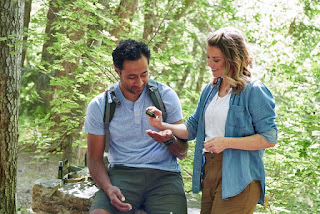 What are repellents and how do they work?

All repellants (including chemicals) whose primary purpose is to deter specific animal species are considered repellants. We use them to prevent tick and mosquito bites, among other things. Repellents work on a variety of principles; for example, some repellants contain chemicals that cause an unpleasant odour in certain animals or irritate the respiratory system of insects.

Repellants, on the other hand, can be both animal-repelling sounds and physical obstacles, such as shiny aluminium foil that repels birds. One of the biological methods of protection is the use of repellants.

We mostly use repellants during the summer, when there are a lot of insects and their presence can be felt "on your own skin." Flies, mosquitoes, and ticks are the most commonly controlled animal species with repellants. Nonetheless, some repellants are used all year.

Repellants are classified into several types based on their origin. The first is made up of so-called natural repellants, which are substances found in nature. It contains a variety of essential oils, the exceptionally strong aroma of which acts as a deterrent to certain insect intruders. The most common essential oil repellants are eucalyptus oil (which is especially effective when combined with peppermint oil), lavender oil for bedbugs, and clove oil.

Insectivorous or insect repellent plants are also used as natural repellants. First and foremost, mosquito, basil, marigold, eucalyptus, mint, geraniums, vanilla, tomatoes, onions, lavender, elderberry, cloves, lemon, and wormwood are plants that can be grown on a balcony and thus act as a barrier against insects.

Another type of repellant is chemical agents. We include all agents, such as creams, sprays, lotions, sticky notes, and others, that have the ability to repel insects. Because of the wide variety of products available, it is important to note that chemical repellants can be classified based on their toxicity level. The least toxic are safe for human skin contact and can be applied directly to it.

The most effective repellants to repel ticks include:

Band for ticks - band soaked in oils is put on the wrist;

patches for ticks - a patch soaked in essential oils does not need to be glued to the body. You can stick it anywhere (on clothes, a backpack or a pram). The patches are less effective than sprays;

Sprays and aerosols for ticks - before a trip to the forest or a walk to the meadow, it is enough to spray yourself with a spray or aerosol that will scare away ticks.

Composition of repellants - what is DEET?

DEET is the short name for a chemical commonly used as one of the active ingredients of biocidal repellants . It is a measure of high efficiency and - unfortunately - low safety of use. When using repellants containing DEET , be especially careful in contact with eyes and skin.

DEET is a colorless or pale yellow liquid with an intense and irritating odor. It is easily soluble in water and reacts chemically with strong acids, bases and oxidants. In contact with insects, DEET works by irritating their sensory receptors, which in turn scares them away and repels them. In addition, DEET in contact with the skin blocks the action of one of the enzymes essential for the proper functioning of the nervous system (acetylcholinesterase). DEET therefore also acts as a neurotoxin.

DEET is mainly used to combat the presence of: ticks, flies , horse flies, bees and wasps , as well as many other types of stinging insects. It is scientifically proven to work - a study in the New England Journal of Medicine found it to be the most effective mosquito repellent.

Additional forms of protection against insects

If you want to protect yourself against insects, it is worth not only using natural or chemical repellants. Caring for your own clothes can also be effective. When going for a walk to a meadow with tall grass or to a forest - we also risk the possibility of contact with dangerous insects.

To some extent, long-sleeved clothes, socks with a strong ribbing and a hat will protect us from ticks and mosquitoes. In addition, after each trip to the bosom of nature, you should carefully examine the surface of your body, looking for insect intruders, and take a shower. It is also worth paying attention to the clothes - you should make sure that there are no ticks in its nooks and crannies.

at May 17, 2022
Email ThisBlogThis!Share to TwitterShare to FacebookShare to Pinterest
Labels: General