US Supreme Court towards the cancellation of the right to abortion.

At least 24 states are ready to abolish access to the termination of pregnancy.

The first huge possible social consequence of the sentence will therefore be the splitting of the United States into two parts. In one it will be possible for women to terminate the pregnancy. In the other, abortion will be punished with prison. 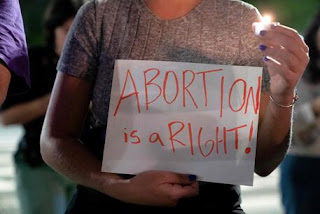 Protests erupt in front of the Supreme Court and in many American cities. The conservatives cheer, who for decades have stubbornly tried to erase the right to abortion. Democrats and women's rights groups express their indignation. Jurists and lawyers discuss the legal foundations of the sentence.

It is a political, social, and cultural earthquake that is unleashed in the United States after the dissemination of the draft that the Court is preparing , and which would overturn Roe v. Wade, the sentence that in 1973 legalized abortion. Among the questions that are asked, there is obviously also the one about who has decided to release the draft, and why.

The sentence was expected by the end of June. Letting it leaked more than a month in advance is a sensational fact , given the sheer secrecy that usually surrounds court rulings until they are published. In these hours it is repeated that, for the first time in American history, a sentence is issued before the official announcement. In fact, that's not quite the case. Just Roe v. Wade was announced with a cover of "Time" magazine, a few hours before its officialization. But it was, precisely, a few hours early, when the sentence was by now final. In this case, however, it is a draft, subject to any changes and second thoughts. So the question: “Why let it come out this early ?, certainly makes sense.

A first huge possible social consequence of the sentence will therefore be the splitting of the United States into two parts. In one it will be possible for women to terminate the pregnancy. In the other, abortion will be punished with prison . Pro-choice states , such as California, were alerted immediately after the draft was published. Gavin Newsom, governor of California, has announced plans to propose an amendment that inserts the right to abortion into the state constitution. Just California, in terms of size, health receptivity, proximity to the states that will ban abortion, is destined to become a kind of port where thousands, probably millions of American women will come to have abortions. A study by the Guttmacher Institute shows that about 1.4 million women of reproductive age in California may wish to have an abortion. An impressive increase in requests, considering that in 2020 about 7,000 women resorted to the abortion services of Planned Parenthood California. The real problem, however, will be that of women of lower income , often very young, often members of minorities, who will not have the financial means to embark on a journey of thousands of miles to have an abortion. For them, the alternative will remain between an unwanted pregnancy or resorting to illegal and dangerous health facilities.

at May 03, 2022
Email ThisBlogThis!Share to TwitterShare to FacebookShare to Pinterest
Labels: Abortion, US