How did the Pakistani actress get selected for the role of "Miss Marvel"?

This will be the first time Marvel has featured a superhero who was born in Pakistan. 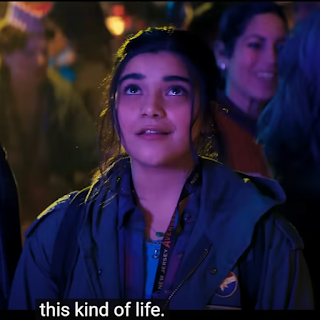 But how did Iman Velani, who is 19 years old, land the role of Marvel superhero Kamala Khan?

When a relative forwarded a WhatsApp message to Iman Velani in February 2020, she learned about Marvel's search for Kamala Khan's role in Miss Marvel.

Iman Velani initially mistook this message for a hoax, but the actress, who enjoys comic books, soon realized that it was all about casting.

After this realization, Iman Velani recorded a video of the audition that she didn't like.

"I thought, 'Well, I can't do that,'" she said. I was attempting to justify my fear of failure, but I realized that I shouldn't give up without giving it my all. "I sent that audition video at 3 a.m.," she says. I got a call two days later.

Then, Iman Villani went to Los Angeles to meet with casting director Sarah Finn. His screen test was done on Zoom because of the Corona epidemic.

Interestingly, on her last day of high school, she was cast as Miss Marvel.

Miss Marvel was supposed to come out last year, but the Corona outbreak made that impossible.

at June 09, 2022
Email ThisBlogThis!Share to TwitterShare to FacebookShare to Pinterest
Labels: Pakistan