the Taliban asked India to reopen its embassy in Kabul

An Indian delegation has arrived in Kabul to hold talks with the Taliban in Afghanistan. 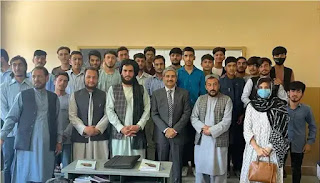 This is the first meeting of an Indian delegation with the Taliban government since the US withdrawal from Afghanistan and the country's fall under Taliban rule, according to foreign media reports.

Suhail Shaheen, the head of the Taliban's political office, said that during Thursday's talks with the Indian delegation, the Taliban asked India to reopen its embassy in Kabul. This was reported by the Hindu.

Diplomatic relations, trade, and humanitarian aid were also discussed during the meeting, according to an Afghan Foreign Ministry spokesman.

During the visit, the Indian delegation is expected to review Indian aid to Afghanistan, according to reports.

India has donated 20,000 tons of wheat, 10 tons of medicines, 500,000 doses of the Corona virus vaccine, winter clothes, and other relief items to Afghanistan so far.