The Life and Times of Angie Bardot: A non-alcoholic cure for a divorce hangover 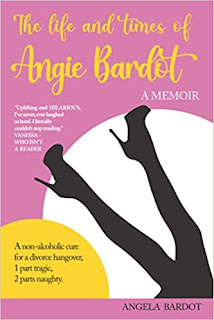 IS THERE AN AFTERLIFE?

Angie is endearingly tragic as she embarks on her adventures, providing a truly hilarious account of what could possibly go wrong when her long-term marriage comes to an end. It's no laughing matter to extol the numerous pitfalls of being single, and it's even worse to be thrust into the dating world.

Chaos ensues when the desire to see a particular part of the male anatomy takes precedence. Angie's journey will make you laugh out loud while also making you raise your eyebrows in disgust.

This two-part true story takes you from "Hell No" to "Hell Yes," evoking a wide range of emotions as you follow Angie on her journey of self-discovery. This compelling portrayal of compassion gives insight into the weakest and strongest moments of what it means to be human.

This compelling depiction of compassion provides insight into the weakest and strongest moments of what it means to be human through a captivating exposé of the courage and frankness required to start over when life takes a turn for the worse.

You'll fall in love with Angie and be unable to put the book down until you've seen what she does next. Being overly cautious is not Angela's strong suit. It's no surprise that she ends up with her tail between her legs on several occasions due to her unique style of telling her story, which is both heartbreaking and hilariously funny.


Does she ever learn?

Angie Bardot, like this book, is a one-of-a-kind individua
Source: amazon.ca
at May 28, 2022 No comments:
Email ThisBlogThis!Share to TwitterShare to FacebookShare to Pinterest
Labels: Books

The Other Queen : A review by Nazeha Maryam Jamal 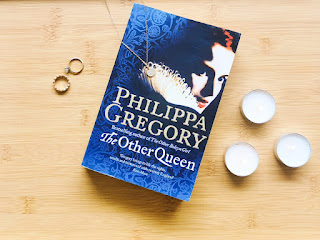 “And I? I am two things at once: the second highest being in the world, a queen; and the very lowest: a woman without home, husband, or fortune. I am a queen three times over because I was born Queen of Scotland, daughter to King James V of Scotland, I was married to the Dauphin of France and inherited the French crown with him, and I am, in my own right, the only true and legitimate heir to the throne of England, being the great-grand niece to King Henry VII of England, though his bastard daughter, Elizebeth has usurped my throne.”

In 1567, Mary was forced to abdicate in favor of her son James who was just one year old at the time. After failing to recover her throne she flees to England hoping that Elizebeth would help her in regaining her crown.  But Elizebeth fearing that she will overthrow her as she had a more legitimate claim to the English throne imprisons her. The story is narrated by three people: Mary, George Talbot and his wife Bess who were Mary’s guardians in England.

The relationship between these two queens is fascinating to me. Mary spent her whole life running from one place to another and that did not give her any experience in ruling a country therefor she was not a good politician. She made a ton of errors in attempt to regain her throne and to me seems incredibly naïve. Whereas Elizebeth was smart and cunning although she seemed to have inherited the paranoia of her father. Elizebeth imprisoned Mary for 19 years and they were such legendary rivals but what’s funny is that they never once met in person. History has a funny way of coming full circle. Elizebeth’s father, King Henry the VII married six women for a male heir but her daughter went on to become one of the greatest female monarchs. Mary’ sons James I united and ruled all Scotland, England and Ireland.

at May 27, 2022 No comments:
Email ThisBlogThis!Share to TwitterShare to FacebookShare to Pinterest
Labels: Books

Olive Smith, a third year Ph.D. candidate finds herself in a ridiculous fake dating arrangement with Dr Adam Carlsen, a young, accomplished and handsome professor at her university. Initially she believes what everyone else at the campus does: that he is “unapproachable and antagonistic”. But gradually she begins to find that there is more to him than his broody, tall self. 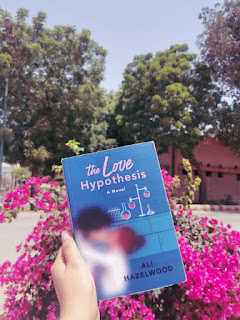 The Love hypothesis is such a feel good, witty and adorable rom com. It's obviously cliched and cheesy but those exact elements made me go gaga over the whole book. I found myself giggling like a little girl at all the “pumpkin spice” and “smart-ass” moments. Judge me if you will but I am a sucker for rom-coms and this just checked all the boxes for me especially because of all the early 2000s vibes.

The characters and relationships in the book are extremely wholesome.  The friendship between Anh, Olive and Malcom is exactly the kind you need to survive your university life.  Holden, though his role was small, I loved how supportive he was of Adam and his happiness. Olive and Adam were such awkward cutie patooties. Finger hearts for them!  The last scene where he stood up for Olive reminded me so much of Cihan when he defended Haya.

In conclusion, if you want to get over your reading slump or in the mood for something light and breezy, this is definitely the one for you.

WAR IS PEACE : FREEDOM IS SLAVERY : IGNORANCE IS STRENGTH - 1984 by George Orwell 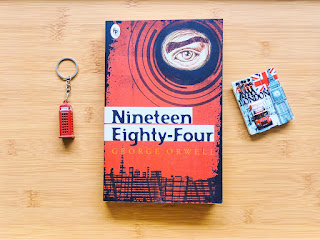 1984 by George Orwell is set in a dystopian future which is not so far from our present. In both Animal Farm and 1984 Orwell has criticized the totalitarian and tyrannical forms of governance which tries to take away the power of reasoning from its subjects. Its was chilling to read each and every page because how can one even begin to imagine living in a world where thought itself is a crime.

I am not going to spoil much but as I said its not that far from our present. We believe we have the freedom to say and do what we want but in reality, we are trapped. We are constantly under surveillance and the fact is that we choose to be (remember clicking on agree without reading the terms and conditions). We instantly believe everything that we see on the news and social media. There is a buttload of propaganda and information we are fed through these channels. You have got to read this as it will surely change the way you see the politicians you support.

Can we please talk about this cover? It is by far the best I have seen and I absolutely love it. It perfectly describes the entire book. I also love the vocabulary of the book but I should say this that it is written like an essay or a long article. That’s why it took me a long time to finish as I was reading a little bit every day.

Review : Where the Crawdads Sing by Delia Owens

“Sunsets are in disguise. 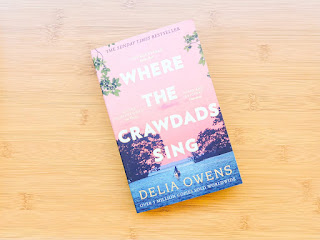 Where the Crawdads Sing is the story of the challenges faced by Kya in her life after she is abandoned by her entire family. Despite being rejected and shunned by most people she manages to survive alone in the marsh by learning all the secrets of the wilderness.

Kya is the heart and soul of this book. I was baffled at the calmness of the little girl even when she had no one at her side. It's been a while since I read a romance novel so the naive young love between her and Tate made me smile often. The storytelling is warm and sweet with wonderful nature descriptions. Combining romance with murder gave me something to look forward to throughout. My favorite scene for some reason is the one where she compares the people in the courtroom to different birds. The way it ended is the best part of it. The poem at the end gave me literal goosebumps. It easily became one of my favorites reads this year.

“A bank robber. A hostage drama. A stairwell full of police officers on their way to storm an apartment. It was easy to get to this point, much easier than you might think. All it took was one single really bad idea.” 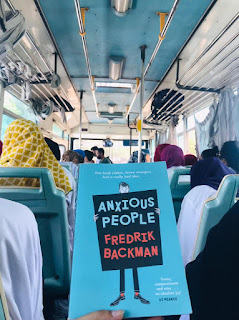 That pretty much sums up synopsis of the story. Chaos ensues when eight anxious strangers at an apartment viewing are held hostage by an equally anxious bank robber. Two policemen trying to defuse the situation. One anxious to catch the culprit and the second concerned for the other’s wellbeing. They have no idea how their lives are going to get entangled in the next few hours.

‘Anxious people’ is a restoring-your-faith-in-humanity-kinda book. Fredrick Backman takes you through the fears, traumas and anxiety of each character and creates and empathetic and relatable bond with the readers. You cannot help but feel compassionate for these people. Their quirkiness and sometimes downright stupidity make you smile.

It’s an unlikely story and as the author says, a story about idiots. It’s not written to astonish you but to calm you. Lighten your heart. To tell you that we all have messy days. We all commit some extremely stupid, embarrassing mistakes. It’s okay to have fears. If you are looking for a light, heart-warming read, then this book is definitely for you but it will also make you cry a little.

at May 25, 2022 No comments:
Email ThisBlogThis!Share to TwitterShare to FacebookShare to Pinterest
Labels: Books
Older Posts Home
Subscribe to: Posts (Atom)