Sarmat, how the unbeatable and unpredictable Russian missile works: Putin's nuclear threat to the West

A new nuclear missile from Russia, with an unpredictable trajectory, can upset the balance of war worldwide.

Russia returns to flex its muscles, after the announcement of hypersonic missiles , with the revelation of a new very powerful weapon - the Sarmat missile - which it could use to hit not only Ukraine but also overseas. The Sarmat intercontinental missile announced by Russian President Vladimir Putin, in fact, has an unlimited range and constitutes a possible threat to all NATO countries.

Vladimir Putin's announcement: "The Sarmat missile will make those who threaten Russia think" 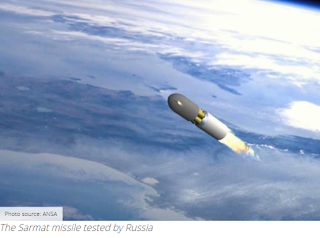 Russia  has announced that it has successfully tested a new ICBM, the Sarmat , capable of "penetrating any existing or future missile defense system". This was announced by the Ministry of Defense.

President Vladimir Putin said that the new missile will give Russia security guarantees "against current threats" and "will make those who are threatening Russia think" for example by sending weapons to Ukraine .

With Russia's announcement of a test of its Sarmat ICBM, Putin appeared on television as he followed the military's work on the launch from Plesetsk, in the northwest of the country, which hit several targets on the Kamchatka Peninsula. , in the far east.

“The new missile has the highest tactical and technical characteristics and is capable of overcoming all modern missile defense means. It has no equal in the world and it won't have any for a long time to come, ”Putin said.

The Sarmat is a new heavy ICBM that Russia is expected to deploy with 10 or more nuclear warheads , according to Reuters. It has been in development for years and its test launch is no real surprise to the West, even if it comes at a time of extreme geopolitical tension due to Russia's war in Ukraine .

The new missile is an " invulnerable nuclear weapon " with an unlimited range and an unpredictable flight path, aspects that could render the US anti-missile shield useless. According to Putin, in fact, Sarmat will be invulnerable to anti-aircraft systems and has no analogues in the world.