The Realme C35 , which we announced at the beginning of the week , debuted in Thailand today . It's time to review the full specification ! 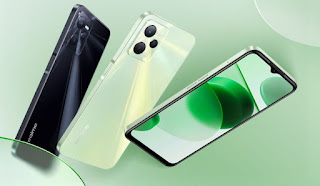 The Realme C35 is not an expensive smartphone, so it has some nice features and - unfortunately - some that could have been saved. The phone can attract attention with its aesthetic and fashionable look, although maliciousness makes me pay attention to the camera frame associated with the iPhone. Fortunately, it is not identical, and the role of the main camera is played by a 50 megapixel unit with f / 1.8 aperture. The other two rear cameras, however, are now paltry - 2 Mpx for macro and monochrome VGA for background effects. Selfie is provided by an 8 Mpx camera with f / 2.0 aperture.

The heart of the smartphone is the not very powerful Unisoc T616 processor, supported by 4 or 6 GB of LPDDR4X memory and UFS 2.2 internal memory with a capacity of 64 or 128 GB. The flash memory can be enlarged with a card without having to give up the use of two SIM cards. The device powers a 5000 mAh battery with a 18 W fast charging system. So far, two-color variants with 4 + 64 or 4 + 128 GB memory have been sold to stores

at February 10, 2022
Email ThisBlogThis!Share to TwitterShare to FacebookShare to Pinterest
Labels: Smartphones