As announced, Realme Narzo 50 has its premiere today . We already know the smartphone from numerous leaks - it's time to sum up everything. 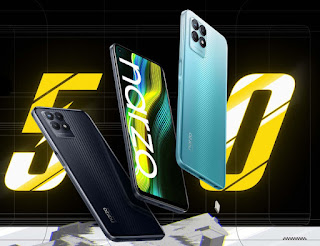 Realme Narzo 50 made its debut in India , where it is offered in two color versions and two memory versions: 4 + 64 and 6 + 128 GB. The prices are respectively 13 and 15.5 thousand rupees, i.e. 173-205 USD or 713-850 PLN. For this amount, we will receive a smartphone based on the MediaTek Helio G96 system, the internal memory of which can be enlarged with a microSD card, and the operational memory - virtually up to 11 GB. The phone will be powered by a 5000 mAh battery with 33 W fast charging.

The Realme UI 2.0 interface (on Android 11) will be viewed on a 6.6-inch IPS display with Full HD + resolution and refresh rates: 30-120 Hz image and 240 Hz touch. In the screen we will see a hole for a 16-megapixel selfie camera, while on the back there will be cameras with 50, 2 and 2 Mpx matrices. The additional ones are, of course, responsible for the macro and blurring the background. No information on distribution outside of India yet.

at February 23, 2022
Email ThisBlogThis!Share to TwitterShare to FacebookShare to Pinterest
Labels: Smartphones