THE MOTOROLA MOTO G22 WILL STAND OUT WITH STYLE!

The premiere of the Motorola Moto G22 is coming soon, so it's time to get to know the appearance of the phone and its specifications. Is there anything interesting about them? 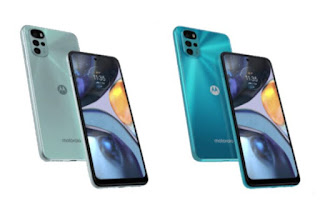 The Motorola Moto G22 will not be a top-shelf smartphone , but it can still attract attention. Even with a look that we have not seen with Motorola so far. The manufacturer will smuggle the characteristic, oval-like shape of the camera frame, but within it he will place a fairly large, dark field, housing the main lens and LED diode. Two more lenses will appear below, and the back of the smartphone case will be flat, with a concentric pattern running from the camera frame. There will be a company logo, and there will be as many as four casing colors to choose from. The front will be less attractive. The budgetary design will reveal a wide "chin" under the display, but there will also be an attractive hole for a selfie camera.

And the specification? It will be just like the appearance - a few interesting elements, a few less. The LCD will be 6.5-inch, with a 90 Hz refresh rate, but with HD + resolution. The heart of the phone will be the MediaTek Helio G37 processor, supported by at least 4 GB of RAM and at least 64 GB of flash memory, which can be enlarged with a microSD card. There will be a mini-jack and a side fingerprint reader, and the power supply will be provided by a 5000 mAh battery. Selfie will be provided by a 16-megapixel camera with f / 2.0 aperture, while on the back we will see a 50-megapixel main camera with f / 1.8 aperture. It will be complemented by an 8 mpx f / 2.2 wide-angle camera and two 2-megapixel cameras with f / 2.4 apertures for macro and background blurring.