Another low priced smartphone from Realme is the C31 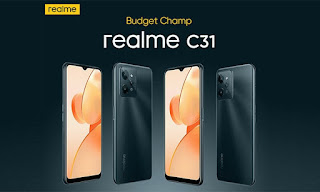 Realme C31 is the first to be introduced in Indonesia.

If you don't know, then know that Realme C series consists of low budget phones and C31 is also a low priced phone.

This phone has a setup of 3 cameras on the back with a large display while the battery size is also reasonable.

The phone has a 6.5-inch LCD display with HD Plus resolution, while the Water Drop Notch has a 5-megapixel hidden camera.

Inside the phone is a USOC T512 octa core processor.

Storage can be further enhanced with a microSD card while the fingerprint scanner is provided on the side.

As mentioned above there is a setup of 3 cameras on the back of the phone.

The phone has a 13-megapixel main camera with macro and black and white cameras.

The company did not specify the megapixel resolutions of the two cameras, but they will likely be equipped with 2 megapixel sensors.

The device has a large 5000 mAh battery with 10 watt charging support.

at March 27, 2022
Email ThisBlogThis!Share to TwitterShare to FacebookShare to Pinterest
Labels: Smartphones