Experts Concerned at the growing heat wave at the poles

Extreme temperatures were recorded this Friday over both Arctic and Antarctic. Photo: File

The poles are also called the bottom of the earth and now, due to the changing weather, a scary heat wave has been observed there for the first time. In other words, temperatures in the Arctic have been recorded at 30 degrees Celsius above normal and 40 degrees Celsius in the Antarctic, which experts have described as extremely worrying.

The National Snow and Ice Center in Colorado also said that the temperature at the North Pole was 50 degrees above normal (Fahrenheit). Then in the middle of March, such heat is a terrible phenomenon and because of being on opposite sides of the earth, the weather there are also opposite to each other, ie in one place it is summer and in another place it is winter. But in this situation, the heatwave is wreaking havoc in both the places and both the areas are melting at the same speed at the same time.

Scientists have admitted that they have never seen such a situation before. That's not a good sign, according to Matthew Lazara, a meteorologist at the University of Wisconsin. He says the temperature in Antarctica at that time should have been minus 43 degrees Celsius, which is noted to be minus ten degrees Celsius.

However, experts have described it as a one-time event. They suspect that this is not a climate change, but if it happens again and again, it will be a terrible thing.

Scientists say it is important to consider this strange phenomenon in order to determine its cause. Scientists have called for more research 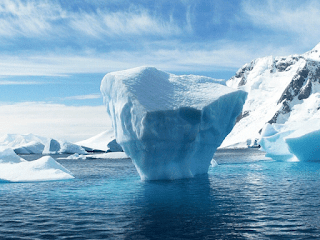