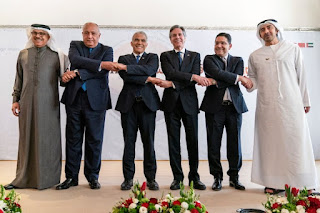 A historic meeting between US Secretary of State Anthony Blankenship, Israel and top diplomats from four Arab countries ended on Monday in which it was agreed that Arab countries should increase cooperation with Israel. This united front will send a strong message to Iran.

Negotiations between the foreign ministers of Israel and the Arab countries, the United Arab Emirates, Bahrain, Morocco and Egypt took place for the first time on Israeli soil.

Israeli Foreign Minister Yair Lapid said that with the new developments and relations between Israel and Arab Countries send a send strong message to Iran, their common enemy.

On the other hand, UAE Foreign Minister Abdullah bin Zayed Al Nahyan termed the two-day gathering as historic and said that we are trying to change the statement here and create a different future.

The question is : What has forced the four Arab countries to develop relations with the state of Israel?

In my opinion Iran’s belligerent behavior has frightened Arab countries.  A year ago the Iranian attack on tankers and oil installations have compelled Arabs to come near Israel in order to fight against the Iran. Arabs also see the rising Turkey as a threat too. In the summit they did not name Turkey but they think that Israel can help them contain Turkey too.

This new plan not only helped Americans to put in place their new architecture but also helped Israel in cementing its position in the Middle East.