This is the new Gt Neo 3, flagship device of the Chinese giant realme (for now only available in China)

From 0 to 50% charge in just 5 minutes. Folly? No, reality. realme has unveiled its new flagship smartphone, Gt Neo 3, in China, capable of breaking all 'recharge' speed records. The Chinese giant has managed to achieve a similar result thanks to the proprietary UltraDart technology, which powers the phone with 150 watts of power. To contain the heat generated by charging, realme adopts a vapor chamber system, with a nine-layer dissipation structure, which should lower peak temperatures by up to 19 degrees. 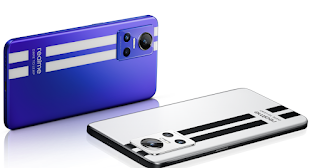 The new realme Gt Neo 3 has a 6.7-inch Amoled display with a 120 Hz refresh rate and is equipped with MediaTek Dimensity 8100 processor, Ram memory up to 12 GB and internal storage capacity up to 256 GB. On the photographic sector front, the smartphone has a 50 megapixel main sensor, an ultra-wide angle of 8 and macro of 2. Other noteworthy features are the stereo speakers, with Dolby Atmos and Hi-Res Audio support, as well as the player fingerprint integrated in the display that can also detect the heartbeat.