Turkish drones in Ukraine showed the war of the future. Bayraktar TB2 do enormous damage

The Bayraktar TB2 drones, produced by the Turkish arms concern Baykar Makina, are nothing new in the military world. Information about them has been reaching us for a long time, but only now, in the face of the war in Ukraine, it turned out in practice what they really can do. In short? A lot, because their combat potential is invaluable, and although it is difficult to admire killing tools, against the background of Poland's growing interest in flying drones , it is good to know what weapons our country will use. 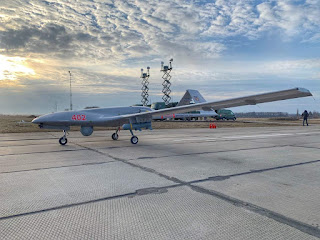 UAV and UCAV are the future. I am talking about unmanned flying drones

Although UAVs (Unmanned Aerial Vehicle) in themselves, or "in Polish" UAV (Unmanned Aerial Vehicle) are nothing new, this is the first conflict on such a scale, which more than shows us how the war of the future. Turkish drones in Ukraine show how devastating it is to combine modern technology with bravado, which, unlike pilots fighting for their lives, there is no shortage of operators who are located in a safe place many hundreds or even thousands of kilometers away. As a result, military missions can be bolder and to a greater extent

For as long as I can remember, I have always been fascinated by remote-controlled flying drones used in the military. The very fact that thanks to them you can completely get rid of the risk of death of a pilot trained for years, was always on the first place in my private list of the main advantages of UAVs. In recent years, I have noticed that what used to be only the domain of the USA (see MQ-9 Reaper) has become one of the main trends in the development of the arms industry.
More and more companies realized that the military equipment of the "future" is automated, and above all, unmanned equipment, but with appropriate systems that are able to replace human personnel "on site" with those who are in the operating station and still have a connection with hardware. However, one cannot forget about the great risk of such automation. You can read more about it in my previous post: automated lethal weapons can shake the world. We need regulations and prohibitions .
Turkish Bayraktar TB2 drones in Ukraine confirmed the huge role of unmanned flying systems in the conflict
Recordings of the Bayraktar TB2 drone in action are regularly uploaded to the network. Admittedly, it is usually "only" a view from on-board systems, but it is still a lot, because we can see at a glance what a properly conducted surprise attack can do. Sounds ridiculous? Probably yes, because apparently although Russia has much more powerful aviation and anti-aircraft systems, the drones in the service of Ukraine manage to threaten the aggressor's ground troops.
Also read: Is there a pilot flying with us? When will autonomous passenger planes appear?
In practice, we know everything about Bayraktar TB2. These are unmanned MALE (Medium Altitude Long Endurance) class drones with a length of 6.5 meters and a wingspan of 12 meters, whose 300-liter fuel reserve allows you to stay in the air for up to 27 hours or fly up to 150 km. They soar up to 8,200 meters and reach speeds of up to 220 km / h thanks to a single Rotax 912 iS engine with 100 horsepower.
Turkish drones Bayraktar TB2, Bayraktar TB2,
Although their role is reduced to reconnaissance, the Bayraktar TB2 can also attack the enemy if necessary. This is done primarily by guided, soaring MAM-L anti-tank missiles with a range of up to 8 km from the drone, which are aimed at the target thanks to a semi-active laser guidance system. In addition, they can fly with MAM-C gliding missiles with universal warheads that are able to penetrate up to 200 mm of RHA steel and hit targets up to 20 meters from the place of impact with shrapnel. Each drone can fly with four missiles suspended under its wings at the same time.
Read also: [Update] What has Ukraine received from its allies? Weapons are among the huge supplies of ammunition and personal defense equipment
When it comes to the use of Bayraktar TB2 in Ukraine, these drones went into the hands of the local air force in the number of 12 copies, which from 2019 were mainly rearmed. However, the contract also included a license that Ukraine received from Baykar Makina, under which another 48 drones were to be built by 2022, thanks to the domestic defense industry. One thing is certain - the more Ukraine has Bayraktar TB2, the better, because their role seems to be invaluable.
On the web, we can watch at least a few recordings of the Bayraktar TB2 attack on Russian troops, and more precisely, vehicles of all kinds. Here and here you can watch how it destroys the 9K37 Buk surface-to-air missile system, causing a massive explosion of ammunition inside the launchers. At this link , you can see its effectiveness in destroying the Russian column of vehicles - the transport was probably chosen with the thought that the explosion would blow up the ammunition that could have been on it.
Each of the successful attacks by Bayraktar TB2 is tantamount to slowing Russia's invasion of Ukraine and saving more lives, although usually at the cost of the lives of "the bad guys". You can see a great example of this here and it is worth watching this video several times and consider whether the Russians really treat Ukraine seriously, or whether they think that they are safe, as they set up transport cars as if they were asking for their destruction with one customs clearance volley. However, I am not remaining idle for the threat posed by Bayraktar TB2, because what you can see below is probably a successful knocking down of one of them:
General