US, Israel, Arab nations join forces to prevent Iran from building atomic bomb. Will they succeed? 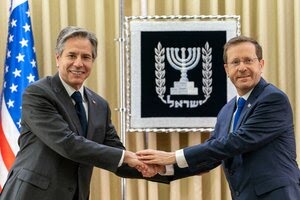 The United States, Israel and the Arab states, which recognize Israel, have joined forces to prevent Iran from building an atomic bomb.

The news that Iran could have nuclear fuel to build an atomic bomb has frightened the Biden Administration. That’s is why they are so eager to revive the nuclear deal because they think it will enable them to stop the progress made by Iran after attacks made by Israel.

Israel attack on Iranian installation only worked in Iran’s favour. It helped Iran to rebuild the installation and give it a pretext to remove the sensors installed by international inspectors.

According to AFP, Anthony Blanken will meet with the foreign ministers of Israel, Morocco, Egypt, Bahrain and the United Arab Emirates in the Negev desert

According to details, US Secretary of State Anthony Blanken said on Sunday that the United States and Israel have agreed to stop Iran from building an atomic bomb.

He said this before talks with Arab foreign ministers in Israel. Occupied Jerusalem is meeting with Israeli officials as there are indications that the historic 2015 nuclear deal with Iran will be restored soon.

Israel says renewed agreement will not be enough to stave off Iranian threat. Iran, on the other hand, insists that its nuclear program is for civilian use only.

Foreign Minister Yair Lapid said Israel had "differences" with Washington over the Iranian nuclear issue, on which it was negotiating "openly and honestly" with its key ally. He said Israel would everything possible to be done in this regard as Israel believed that Iranian threat is real.

He said that Iranians want to destroy Israel but they would not let them succeed. The US Secretary of State has sought to reassure Israeli and Arab partners attending a unique meeting in Israel that the United States will continue to counter the Iranian threat.

The question is: will Iran stop the fuel development when they have approach the final stage of their work?

I don’t think so.  Though Israel’s concern looks genuine and credible. If sanctions are lifted it will provide resources to Iran to speed up their work.