Google Maps will receive a significant update, after which they will benefit, among others more accurate graphics of buildings, estimating travel costs and will mark STOP signs and traffic lights during navigation. There is one catch - not all new releases will be available in every country. 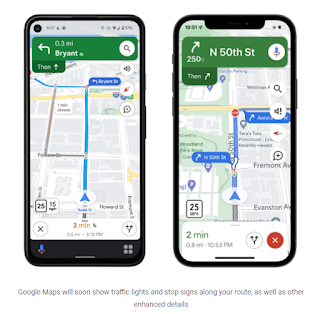 Google remains a bit mysterious on this topic. While we know from  the blog entry that information on the cost of toll roads will appear in Google Maps first only in the USA, India, Japan and Indonesia , in the case of other news, only "selected countries" are mentioned. It is a pity that no details have been released so far, because the changes promise to be interesting.

Google maps will gain more accurate graphics covering the shapes of buildings and public places. Bearing in mind that the changes will be visible in the navigation mode, they will be a significant help for people trying to find themselves in a strange city. In addition, there will be marked STOP signs and traffic lights at intersections, and in selected cities , information about the width of the road, separation lanes and islands.

All this is to work not only in the mobile application for Android and iOS, but also immediately in  Android Auto and Apple CarPlay. Unfortunately, Google only talks about rollout to "selected countries in the coming weeks." There is no doubt that the changes will be visible in the US , but what other countries will be included in the update - we do not know. It can be assumed that ultimately all, or at least most, but the terms remain a mystery.

Additional changes will apply to users of Google Maps on iPhones. After the update, Maps will offer new widgets to speed up navigation to your favorite places, the Apple Watch will be able to navigate without access to the iPhone , and the search will be facilitated by the integration of Maps with Siri and Spotlight.