HOW TO TAKE CARE OF BEARD HYGIENE?

Scientists have conducted research to obtain information on beard hygiene. They discovered that they are home to many microorganisms, including pathogenic forms if hygiene is not at a satisfactory level. Thus, one study showed that there are more bacteria on the chin than dogs have on their hair. 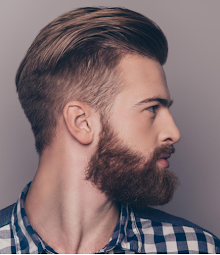 This is certainly due to the fact that people reflexively touch their own face, and thus their chin, thus transmitting bacteria and other microorganisms from their own environment. In addition, many microorganisms are transmitted by air (more precisely in the form of aerosols), so it is even easier to "plant" on the chin.

The most common bacterium that inhabits the beard is Staphylococcus aureus, otherwise a harmless bacterium, except when it can "enter" the body through a cut and cause infection. The genus Enterococcus includes bacteria that normally inhibit digestive system of healthy people as an integral part of the intestinal microflora, but they are also known to cause urinary tract infections. It is important to note that they are also found on the chin of men, with an emphasis on the species Enterococcus faecalis.

Taking care of your own beard shape and shape is certainly desirable, but it is equally desirable to take care of its hygiene. By choosing the right product for regular disinfection of the beard,

Antiseptics are a group of compounds that are applied directly to the skin and / or mucous membranes in order to reduce the risk of microbial colonization and infection or to treat existing infections.

Octened lotion for washing skin and scalp with the addition of antiseptics octenidine and allantoin for skin and hair care. Octenidines are a new generation of antiseptic used on wounds, surrounding skin and mucous membranes to prevent the development of infection. In addition to a wide range of action, they are characterized by a rapid onset of action within one minute of application and a long-lasting effect lasting up to 24 hours. They can be used to prevent bacterial, viral and fungal infections. They are pH neutral, colorless, and odorless. Allantoin supplementation nourishes the skin and hair.
Health