HarmonyOS 3.0 is lagging behind the schedule : at this time the alternative operating system to ( or rather: derived from ) Android, developed by Huawei in response to the ban imposed by the United States a few years ago , should already be in the Beta phase for a few weeks, and instead the only builds in circulation are Developer Preview. IT Home reports that Beta builds are expected to arrive shortly, but at this point it is not clear whether Huawei will be able to release it in stable form by July as originally forecast. 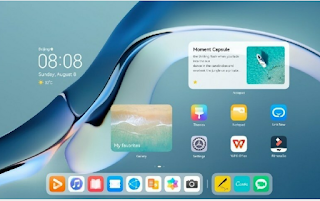 Huawei launched the test program towards the end of last year: as you can also see from the image below, it is very similar to the now traditional Google for Android, even if the timing changes a bit (with Google yes typically starts around February with stable release around September / October). The Chinese company says the main goal is to increase interest in the operating platform of third-party developers .

Apparently the new version of the operating system focuses even more on the interconnection between multiple categories of devices . The goal is to make the control of various smart devices simple, intuitive and immediate via your smartphone equipped with HarmonyOS 3.0. A demo told by the source concerns a smart mirror: during a video call just make a light "tap" of the mirror with the smartphone to transfer the video call from the phone to the mirror.

So far HarmonyOS has been relegated to Huawei's smartphones, but we know that the giant founded by Ren Zhengfei has great ambitions: by the end of 2021 the HarmonyOS initiative had 2,000 partners for the production of smart gadgets, and 2022 could be the year of arrival of the system also in Europe. In China, the first non-Huawei smartphones have also begun to be spotted , although for now the concrete news is shaky and smoky at best.