Is red meat harmful to health?

The consumption of red meat has increased significantly in the last few decades, especially in highly developed countries. Some people still believe that it is a necessary ingredient of the dinner. Unfortunately, high consumption of red and processed meats contributes to the development of many serious diseases. 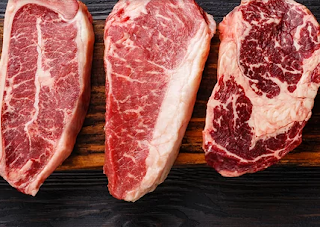 The Working Group of the International Agency for Research on Cancer (IARC) identified red meat as unprocessed meat from mammalian muscles - beef, pork, lamb, lamb, goat and horse. Processed meat, in turn, was defined as having undergone salting, smoking, curing or other processes aimed at improving its taste or texture.

Red meat is a very good source of wholesome protein as it contains essential amino acids. In addition, it is a rich source of B vitamins (especially B12) and minerals such as selenium, zinc and heme iron. It can be recommended in conditions such as anemia.

Even though red meat contains the essential nutrients listed above, there are healthier ways to get them. Meat products contain large amounts of saturated fatty acids, the consumption of which should be limited as much as possible. They contribute to an increase in the level of total cholesterol in the blood and LDL cholesterol, which negatively affects health and contributes to the development of many diseases. Red meat should therefore be eaten in moderation.

The high mortality of cancer patients  is a huge problem all over the world.

It was also found that the consumption of red meat is associated with a higher probability of developing pancreatic and prostate cancer, and that of processed meat - gastric cancer (RJ Turesky 2015). Studies have also shown that postmenopausal women who eat large amounts of red and / or processed meat in their diets are at risk of developing breast cancer (A. Diallo et al. 2017).

A meta-analysis conducted in 2017, including 11 cohort studies with over 52.5 thousand participants. people with type 2 diabetes showed that the consumption of red meat (regardless of the degree of processing) increases the risk of this disease by 22%, while the consumption of processed meat - by as much as 39%. (S. Tian et al. 2017). However, it is not known which ingredients are responsible for this.

They could possibly be: