Meghan Markle is obsessed with fame: she wanted to be the Windsor response to Angelina Jolie

The popular writer Tina Brown, who is famous all over the world for books about the life of Princess Diana, has set herself the goal of revealing the secrets of the royal family in her latest book "Palace Stories".

Tina Brown talked to over 120 people who know the royal family well. The interviewees provided the author with a lot of materials for the book. 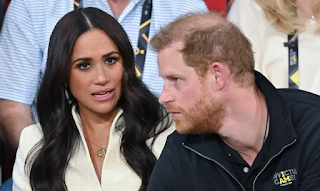 From their statements, the writer learned, among other things, that Queen Elizabeth II considered her heir to the throne, Prince Charles , as "too sensitive, too emotional, too complicated and too egocentric" to take the throne.

It is said that even Prince Philip considered himself not the best material for a king. The author also revealed that Prince Charles is so demanding that he even took his toilet seat and bed during his travels. Often, a day before his arrival at his destination, a van with furniture pulled up in front of the house, from which equipment and even a few paintings were unloaded. His teddy bear also travels with him in a special plastic travel bag.

Meghan Markle wanted to be the royal Angelina Jolie

In "Palace Stories", readers will also learn about the background of Meghan Markle and Harry's wedding. According to the author, Prince Charles' son accelerated the wedding with his beloved, despite his brother's fears. The decision was reportedly dictated by a desire to gain personal protection. On her wedding day, Meghan Markle wanted to wear a royal diadem that the queen herself was supposed to lend her. The palace, however, refused Harry's future wife. He panicked and she yelled at the staff.

Tina Brown describes Meghan's "willful blindness to institutional royal culture". The American actress believed that the British monarch needed her more than the royal family. It has become a ticking time bomb.

Harry's behavior was to arouse great anxiety among his relatives, who looked at him as "mentally unstable, still terrified by the death of his mother and prone to outbursts of anger". Meanwhile, tensions between Meghan Markle and the royal family grew.

The life of the royal family described in "Palace Stories" is shown in gloomy colors. The author also talks about "endlessly boring public appearances and gloomy vacations in drafty castles." Kate fitted in fairly quickly, but Meghan had more ambitions.

at April 28, 2022
Email ThisBlogThis!Share to TwitterShare to FacebookShare to Pinterest
Labels: Gossips