Samsung Galaxy A53 vs Galaxy A33

The challenge between the mid-range is increasingly heated and also Samsung means its with the new members of the "Galaxy A" family that is slowly being composed. In these days I had the opportunity to try two of the latest arrivals, namely Galaxy A33 and Galaxy A53 , both 5G and more similar than ever given the new Exynos 1280 platform on which they rest.

The Korean house has worked "little" to distinguish them from each other and above all raised the level of the cheaper of the two, the Galaxy A33 which certainly stands out more than the previous generation. The interpretation is more or less this but, beyond the scenario considerations, let's talk today about the two smartphones and which one actually makes sense net of the proposals already on the market. 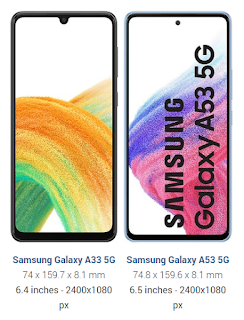 From a first glance we could almost say that they are heterozygous twins , because the lines are almost identical but there are details that change in substance: first of all the dimensions. The Galaxy A53 is in fact slightly wider with its 6.5-inch diagonal display and 74.8 mm on the "abscissa" axis, in spite of a Galaxy A33 that boasts a slightly smaller panel (6.4 " ) and 74 mm wide.
Basically, the latter is a little narrower and easier to grip , the little that makes the difference having both of them available. I personally find it more comfortable, then the almost flat edges (in metal) that Samsung has chosen for many of its mobile devices of 2022 help. Of course the Galaxy A53 has narrower bezels, or rather, it's fair to speak in the singular since three sides are virtually identical and only the lower one is more minute on this model.
The back is the same, made of polycarbonate and modeled on the raised module of the cameras which can be reached with a gentle curved rise. I find it aesthetically pleasing, more than many solutions that detach too much from the rest of the back cover and often seem "foreign" elements. We could then discuss the differences between the Infinity O display of the Galaxy A53 and the Infinity U display of the Galaxy A33 , with the former being much more modern and the latter reminding us of lines from the past. What really matters is the technology - Super Amoled for both , and for the Galaxy A33 that's great news.
Lights and shadows for two certainly expected mid-range that immediately focus on one of the latest SoCs from Samsung, the Exynos 1280 made with a 5nm production process and strong top-level components: two Arm Cortex-A78 with a maximum operating frequency of 2.4 GHz, six Cortex-A55 with frequency of 2 GHz and four-core Arm Mali-G68 GPU, with maximum operating frequency of 1.000 MHz.
Nothing that suggests particular limits for the range in which they landed, but it is also true that you have to deal with the software and, on this front, Samsung certainly has to work. The OneUI 4.1 and Android 12 seem to weigh down the two devices a little , which, at times, show some slowdown too much. Nobody expects top-of-the-range performance, mind you, but by now we have reached a level that even the so-called midranges run fast and here I have the impression that there is some bottleneck.
We'll see if the parent company will be able to improve things with some updates in the near future, I certainly don't like the choice of using UFS 2.1 memories for a multinational that does business with memories. Integrating much faster UFS 3.0 would have been at least appropriate in 2022, maybe it would have cost a couple of dollars more but it is likely that the whole system would have benefited. Here are the test results:
Galaxy A33 - 522 MB / s read and 488 MB / s write
Galaxy A53 - 525 MB / s read and 488 MB / s write

at April 09, 2022
Email ThisBlogThis!Share to TwitterShare to FacebookShare to Pinterest
Labels: Smartphones