It is not without reason that we are currently paying special attention to the MQ-9 Reaper drones by General Atomics, because in February we learned that the Polish Army wants to purchase these American UCAV (Unmanned Air Combat Systems). We still have to wait for the details of this purchase and although we do not know if it will not be left only on paper, it is still worth following how these "Reapers" are developing, who can now fly with modern Seaspray 7500E V2 radars from Leonardo. 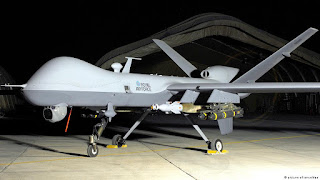 General Atomics Aeronautical announced that the first flight of the MQ-9A Reaper Block 5 drones took place on April 14, after integration with Leonardo Seaspray 7500E V2 radar stations. Thanks to them, drones have even better capabilities in the field of patrol and reconnaissance over sea areas, because they can detect enemy ships further (up to 592 km), with greater precision and in a much higher number.

This radar is the largest and most efficient in the Sea Spray AESA family and is not so much a separate model as an upgrade to the proven 7500E. It is equipped with modernized technology to meet the changing requirements of reconnaissance, observation and reconnaissance missions in the aquatic environment. No wonder the plans also include integrating this radar with the MQ-9B SeaGuardian..

As we wrote earlier, the MQ-9 A Reaper drone is a cult and well-known UCAV all over the world, the history of which dates back to 1998. Its tasks include, above all, the implementation of reconnaissance and intelligence missions thanks to its advanced observation systems.

Of course, however, it was not the observation systems that made him hit the headlines more than once, because it owes its impressive capacity to carry over 1000 kilograms of weapons suspended on a total of seven underwing knots, such as laser-guided bombs or missiles of all kinds.

The maximum speed of 482 km / h and the range of 5,900 km is also impressive, with the possibility of entering a ceiling of 15,200 meters and staying in flight for up to 28 hours. These features clearly show the great strategic potential of this combat drone, which the crews of ships belonging to the group of potential enemies of the US should now fear more. Example? China, whose fleet is growing every month, or Russia, because it's ... Russia

at April 28, 2022
Email ThisBlogThis!Share to TwitterShare to FacebookShare to Pinterest
Labels: General