We tested the new iPhone SE: a manageable mobile with a screen with gigantic frames

The smartphone is launched with 5G connectivity and incorporates the same processor as the iPhone 13.

The iPhone SE was last year among the 10 best-selling phones on the market, according to the consulting firm Counterpoint Research . If this smartphone stands out for something, it is for its compact design and a more affordable price than Apple's flagships. 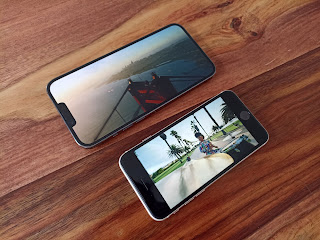 The mobile is available in three colors – black, white and red. Its design differs quite a bit from the iPhone 13 range . Instead, the company from  California maintains some features that it already incorporated in older smartphones, such as the iPhone 8 . Instead of flat edges, the iPhone SE has curves on the sides. In addition, it dispenses with the large square camera module that the iPhone 13 incorporates on its back and incorporates a single lens.

The smartphone  is, above all, a small and light mobile: it measures 13.8 centimeters high, 6.7 centimeters wide and 7.3 millimeters thick, and weighs 144 grams. It handles perfectly with one hand. One of its great advantages compared to the large devices that most manufacturers bet on is that it can be easily stored in pockets of different sizes; but its small dimensions do not make it an ideal smartphone to consume audiovisual content or to spend time with video games.

Its 4.7-inch screen is very small, even when compared to compact phones, such as the iPhone 13 Mini (5.4 inches). In addition, a greater use of the front is missing, which, in this case, is 65%. In it, some large black frames stand out.

The lower area incorporates a Touch ID sensor, which is used both to quickly unlock the terminal with the fingerprint and to invoke Siri or return to the main screen. Unlike the iPhone 13, the SE 3 does not incorporate Face ID, the system to unlock the mobile with facial recognition.

In the photographic section, the iPhone SE is simpler than its older brothers, since it lacks a wide angle and telephoto lens. It also stays out of the megapixel wars : it only has a 7-megapixel front camera and a 12-megapixel rear. The main camera works very well when lighting conditions are favorable. In addition to a good level of detail, realistic photographs with a good dynamic range are achieved. With the front camera, photos are also quite sharp during the day. Of course, both sensors suffer a little more when there is little light. The terminal lacks night mode and, when taking night shots, details are lost and noise appears.

The processor of the iPhone 13

Despite its small dimensions, the iPhone SE is a powerful mobile, since it incorporates the processor of the most ambitious iPhones on the market : the A15 Bionic chip. In addition, for the first time it is compatible with 5G networks. Although Apple does not usually reveal the RAM of its mobiles at its events, several specialized media suggest that it will have 4GB . The device has 60, 128 or 256 GB of storage. Its performance is positive in all assumptions; In the tests carried out, no type of delay has been experienced when executing the applications.

Apple has also not made public the capacity of its battery. The specialized mobile portal GSMArena indicates that it is 2,018 mAh. Its duration depends on the use given to the device. If it is intensive, it does not reach the whole day, but, if it is used in a more restrained way, it can reach the end of the day. The mobile supports 20W fast cable charging, but Apple does not include a charger in the box, citing environmental reasons .