AMD has released three video cards from the RX 6000 family . Existing processors are utilized, but with faster memory and changed software, the RX 6950 XT, RX 6750 XT, and RX 6650 XT should stand out from the video cards that come after them. 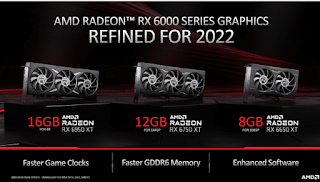 Although there are increasing rumors regarding the next generation of video cards, this hasn't stopped Nvidia and AMD from launching faster models late in the current generation's lifecycle. The RTX 3090 Ti, a maximally screwed-up Ampere card that stood out mostly owing to its huge energy consumption, was just released. This time it's AMD's turn, which uses greater TGPs on the three new Radeons, despite the fact that it doesn't appear to make a large effect on paper. These improvements are due to the somewhat quicker processor rates and video memory.

According to the reference specifications, the Radeon RX 6950 XT is positioned as the new flagship above the RX 6900 XT and uses a maximum of 335 watts, which is 11% higher than the RX 6900 XT. It is a complement to the portfolio and does not replace the RX 6900 XT, but with a higher-clocked GPU and GDDR6 memory, it should outperform it. The maximum reference power consumption of 250 watts on the RX 6750 XT is also greater than the 230 watts on the RX 6700 XT. In AMD's lineup, these two GPUs will continue to coexist. The RX 6650 XT, on the other hand, entirely replaces the RX 6600 XT. According to AMD, the later card will be phased out altogether once current stocks are depleted.

The three new Radeons have one thing in common: they all have faster GDDR6 memory than the RX 6000 series, which is also the most noticeable change. The new video memory has a speed of 18 Gbit per second, which is somewhat quicker than the current RX 6000 series cards' 16 Gbit per second. With contemporary GPUs, the speed of video memory is a decisive element in performance. With the continued development and improvement of GDDR6, AMD now sees the prospect of marginally improving the performance of its current graphics chips in games without too much intervention. Because these chips use Infinity Cache, the potential improvement is somewhat lesser with the RDNA2 design.

The RX 6950 XT and RX 6750 XT were tested with MSI's Gaming X Trio cards in this review. We were forced to use bespoke cards because AMD refused to offer us reference cards. Furthermore, these two models were unable to be calibrated to the reference standard, potentially distorting the appearance of how much faster the new cards are.