On his Netflix show, comedian Dave Chappelle was attacked.

In Los Angeles, Dave Chappelle (48) tells a few jokes. The audience erupts in laughter. But then something unexpected happens: a man storms the stage and attacks the American comedian! 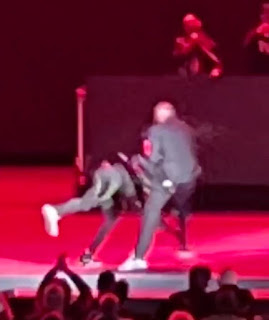 On the Netflix Is A Joke live concert, Chappelle is seen being surprised by the attacker in a short footage that has gone viral.

From the left, a man leaps at him, throwing his entire body weight against the 1.83 m tall comedian and actor. He can't react fast enough to keep up with all that's going on.

Security forces are called to the scene right away. Chappelle even receives assistance from a coworker!

According to the "Daily Mail," actor, comedian, and musician Jamie Foxx (54), who was in the audience of the Hollywood Bowl wearing a cowboy hat, ran over to assist security in removing the man from the stage.

As soon as Chappelle regains consciousness following the shock, he attempts to defuse the situation by joking, "It was a trans man." Did anyone, however, think that amusing?

Because he was referencing to the uproar his comedy show "The Closer" sparked last year. He made fun of transgender people and horrified people by equating trans ladies to the racist depiction approach of blackfacing, among other things.

Comedian Chris Rock was among those who witnessed the attack and subsequently took the stage (57). "Was that Will Smith?" he couldn't help but wonder.

Because he had a similar experience at the Academy Awards. Will Smith (53), a Hollywood star, stormed the stage and slapped him across the face after he made fun of his wife Jada Pinkett Smith's (50) circular hair loss.

Dave Chappelle later praised Jamie Foxx, saying, "Whenever you're in trouble, Jamie Foxx will turn up with a sheriff's cap," addressing his audience from the stage. And Foxx responded, " "That seemed to be a part of the show. I had no idea what was going on... We're not going to let anything bad happen to you."