Police response to a school shooting in Texas has been questioned by investigators.

On Saturday, Texas investigators were attempting to determine how critical errors occurred in the aftermath of the Uvalde massacre, including why nearly 20 police officers remained outside a primary school classroom while panicked children dialed 911 for assistance. 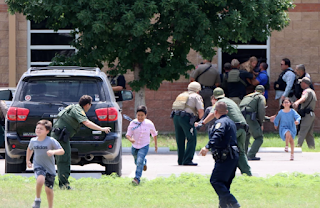 The ongoing investigation by the Texas Department of Public Safety into the massacre of 19 children and two teachers in the deadliest school shooting in the United States in nearly a decade is focused on why officers waited nearly an hour in the hallway before entering and killing the gunman.

Investigators are also trying to figure out why the attack happened. Salvador Ramos had no criminal record and no history of mental illness when he dropped out of high school.

According to Colonel Steven McCraw, director of the Department of Public Safety in Texas, at least two children in two adjacent fourth-grade rooms called 911 after Ramos, 18, entered the building on Tuesday with an AR-15 semi-automatic rifle.

The commander on the scene, the chief of the school district's police department, believed Ramos was barricaded inside and the children were no longer in immediate danger, according to McCraw, giving officers time to prepare.