Qualcomm has unveiled the Snapdragon 8+ Gen 1 and Snapdragon 7 Gen 1 processors.

Snapdragon 8+ Gen 1 and Snapdragon 7 Gen 1 are two new mobile platforms that aim to further raise the bar at the premium end of the market, as Qualcomm continues to accelerate. The San Diego house typically releases an improved and slightly revised version of its best SoCs in the middle of the year, and it did so again in this round. 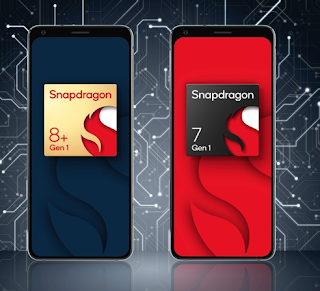 In contrast, Snapdragon 7 Gen 1 aims to provide excellent features even at the medium-high end of the market; in other words, the "old" generation SD7xx, which has been renamed and ostensibly boosted in performance. Let's examine them in depth, as both will hit the market as early as this quarter's conclusion, which means they will soon be available to buyers alongside unpublished new arrivals.

With so much power, the focus inevitably shifts to gaming, to the point where we speak of the integrated Snapdragon Elite Gaming suite of features. The GPU is the same Adreno 730 as the "original" model, but with a few additional tricks that boost performance by approximately 10% while reducing power consumption by 30%. Identical percentage gains are noted for the CPU, despite its slightly higher operating frequency (3.2 GHz versus 3.0 GHz for the base model).

This could be one of the most intriguing aspects of the Snapdragon 8+ Gen 1 compared to its predecessor, as a reduction of one-third in power consumption is not a joke. For the most part, the SoC has remained virtually unchanged; in other words, the "monster" of power that enables 8K HDR video capture, simultaneous 64MP image capture (thanks to three 18-bit ISPs), and maximum mobile connectivity remains. This is made possible by the already-familiar Snapdragon X65 modem (5G, SA, and NSA) and Fastconnect 6900 (WiFi 6 and 6E).

Many companies, including Asus (Rog), Black Shark, Honor, iQOO, Lenovo, Motorola, Nubia, OnePlus, Oppo, Realme, RedMagic, Redmi, Vivo, Xiaomi, and ZTE, will use it beginning in the third quarter of 2022.