The Realme GT Neo 3 Naruto edition has just been released in China, and it appears to be quite impressive.

The smartphone's specifications are identical to those of the Vanilla Realme GT Neo 3 that was released a month ago, but its design is novel and intriguing. 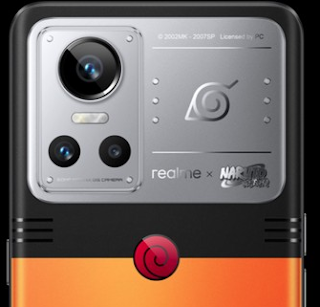 The phone was created in collaboration with Naruto, a popular anime and manga series. In short, it is aimed at Naruto fans.

Masashi Kishimoto is the author and illustrator of the Naruto manga series in Japan. It tells the story of Naruto Uzumaki, a young ninja who wants to be respected by his peers and become the Hokage, the leader of his village.

The smartphone's metal back is adorned with a "micro 3D" texture that provides a 3D effect to the naked eye, evoking Naruto's traditional headband.

The back of the limited edition is made to look like the main character's outfit in the Naruto Shippuden anime series. Orange is the primary color, which is combined with matte black and metallic gray.

For its Naruto-themed special edition, Realme wanted to pay close attention to every detail. Therefore, the camera group, which is slightly elevated from the back, is placed on a silver plate bearing the Realme and Naruto logos. The Realme UI can also be customized with specific themes and backgrounds, as well as a replica of the main character, who uses the "Rasengan" and the five fundamental elements to initiate the 150-watt UltraDart super fast charging.

The special edition of the Realme GT 3 Neo is inspired by the Naruto scroll, includes a pin in the shape of the Hidden Leaf village logo, and includes special accessories such as a themed case and a 10,000 mAh, 33 W Realme 3 Pro power bank with fast charging.

As anticipated at the outset, the Realme GT Neo 3 Naruto Edition will only be available for pre-order in China in the variant with 12 + 256 GB of memory at a price of 2,799 yuan (the same as the equivalent standard variant), which is equivalent to approximately 390 euros at the current exchange rate. When fully operational, the price will equal 430 euros.

at May 26, 2022
Email ThisBlogThis!Share to TwitterShare to FacebookShare to Pinterest
Labels: Smartphones