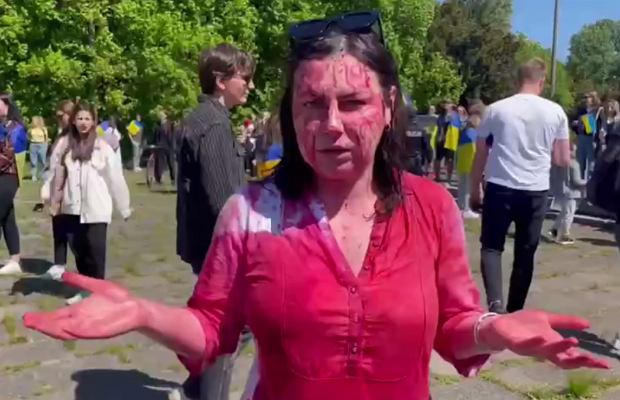 Ukrainian activist Iryna Zemlyana, who poured red liquid on the Russian ambassador, she fled Warsaw because she was receiving death threats. . She said her name was added to the Russian "war criminals base".

The Russian ambassador was drenched in red substance on May 9 during an attempt to lay a wreath at the Soviet Soldiers' Cemetery-Mausoleum.

Iryna Zemlyana, a Ukrainian activist and journalist, confessed to this act. The woman, however, assured that it was not an attack on a diplomat, and that the paint was poured on it by accident.

I agree with her it was a matter of honour. However, she must know that the matter involved an diplomat and they are enjoy diplomatic protocol and respect agreed by the nations across the globe.

Russians citizens can do the same thing in retaliation to Polish ambassador in Russian.

I think it was a bad idea to throw red paint on Ambassador Sergei Andreyev.  She could have protested in peaceful way.  Now this incident has created a diplomatic crisis for her country. Does she have any idea how this can be resolved?

This kind of incident has started wars.

The inclusion of her name in the Russian "war criminals base" tells us that Russians government has taken the incident very seriously.

at May 17, 2022
Email ThisBlogThis!Share to TwitterShare to FacebookShare to Pinterest
Labels: Russia, Ukraine