A free trade agreement between UAE and Israel has been signed. Pakistan should also establish relations with Israel

- June 02, 2022
A free trade agreement between the United Arab Emirates and Israel has been signed. 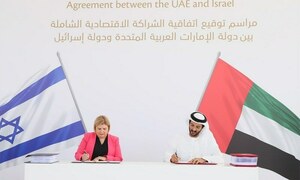 The agreement, according to UAE Ambassador Mohammed Al-Khawaja, is "unprecedented." Mohammed Al-Khawaja is pictured in this photo. Twitter
The United Arab Emirates and Israel have signed a Free Trade Agreement (FTA) aimed at increasing trade between the two Middle Eastern countries.
The agreement was concluded after months of negotiations, according to a report by the international news agency 'Reuters.'
"The UAE and Israel will sign the FTA in the next hour," Israel's ambassador to the UAE, Amir Hayek, wrote on Twitter. '
The deal was described as a "exceptional success" by UAE Ambassador to Israel Mohammed al-Khawaja.
"Both countries will gain from reduced tariffs and quicker access to the business market. The two countries are cooperating to expand commerce, create jobs, develop new capabilities, and improve cooperation "He expressed himself.
UAE The trade deal clarified tax rates, intellectual property, and imports, according to Dorian Barak, president of the Israel Business Council, encouraging Israeli companies to establish operations in the UAE, particularly in Dubai.
Approximately 1,000 Israeli enterprises are expected to operate in the UAE or through South Asia, the Far East, and the Middle East, according to the council.
"The local market does not provide full opportunities," Dorian Barak told Reuters, "therefore this potential will be found only in Dubai, where many enterprises will be able to expand."
The Israeli Ministry of Economy stated prior to the signing of the deal that tariffs on food, agriculture, cosmetics, medical equipment, and medications would be eliminated.
"Together, we can put an end to the resistance and encourage large-scale trade and technology. The deal will pave the way for a more united front "Orna Barbie, Israel's Economy and Industry Minister, said as much.
Pakistan should also establish relations with Israel.
Neither Allah nor the Prophet has ordered not to establish relations with Jews.
Pakistan UAE