The Luhansk region in eastern Ukraine is on the verge of being completely taken over by Russian troops.  Putin, the Kremlin's leader, has set this as a major war goal. 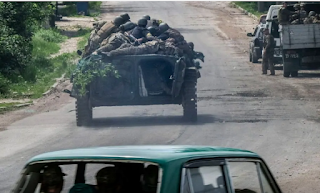 If Sievjerodonetsk, the besieged regional capital, falls, Russia will have achieved one of its war goals: complete control of the Luhansk region.

The Russian troops and Moscow-aligned separatists could then advance further west into the Donetsk region, capturing the strategically important cities of Sloviansk and Kramatorsk.

Sieverodonetsk, the administrative center of the Ukrainian-controlled Luhansk region, has been contested for several days. Leonid Pasechnik, the leader of the People's Republic of Luhansk, which Vladimir Putin has recognized as a state, stated that pro-Russian forces now control two-thirds of the city.

According to Hajday, the majority of Sieverodonetsk is now under Russian control. However, the Ukrainian defenders did not surrender. He stated that 90% of the city's buildings are damaged and 60% are not worth rebuilding. There were once 100,000 inhabitants, but only 12,000 are believed to have remained.

Are American leaders paying attention the destruction caused by the war?

They must stop this war.