Significant increase in the price of flour, milk and bread after petrol became more expensive 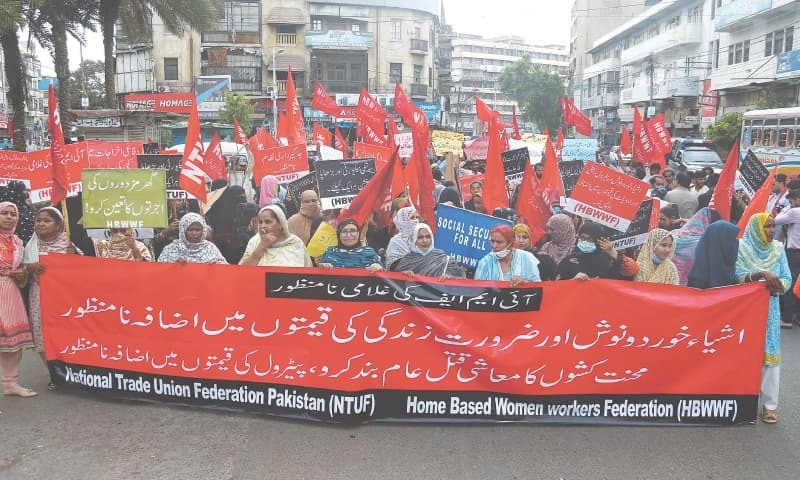 In Karachi, residents are protesting against inflation. White Star (photo)
Following the tremendous increase in the costs of wheat, cooking oil, rice, electricity, gas, fuel, and petrol throughout the country, another inflation bomb has been unleashed on the already battered populace.
The prices of important breakfast foods have been raised by dairy stakeholders and bread producers.
For those whose wages are either stagnant or have fallen over the last few years, the trend of rising costs of vital commodities is especially unpleasant.
On Sunday, dairy farmers and milk retailers agreed to raise the price of milk by Rs 20 per liter, raising the cost of fresh milk to Rs 170 per liter. Yogurt will now cost Rs 280 per kilogram, up from Rs 240 previously.
Dairy producers and milk merchants, on the other hand, are blaming each other for price increases, which is producing problems for customers.
The cost of double bread and bakery items is likewise high.
According to Haroon Iqbal Sheikh, General Secretary of the Karachi Bread Association, the group has decided to raise bread and other commodities' costs by 16 to 17 percent in the first phase, which will begin on June 10.
He explained that the decision was made in light of a 35-40% increase in production costs over the previous six months.
He stated that, following a further increase in diesel prices of Rs. 30 per litre, as well as increases in power and gas prices, we may hike prices by another 10 to 15% in July and August due to increased manufacturing costs.
Pakistan