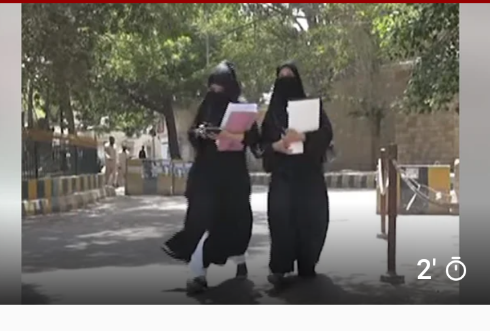 Karachi: It is very difficult to speak out against the rule of Occupy Mafia in Quaid-e-Azam city.

But Syeda Maria Raza and Noorin Nazli are two brave women of Karachi who have been raising awareness of revolt against this mafia everywhere from the Supreme Court to the district administration for the last six years.

Syeda Maria Raza, an IT student and Noorin Nazli, a teacher in a private school, came to Gulshan-e-Iqbal in 2014 after the most difficult journey to government institutions and court. Also faced.

An investigation into the matter revealed that the area's drain was ruled by the Occupy Mafia, against which Maria Raza decided to appear in court in person, after which she, along with her colleague Noorin Nazli, took a stand against the Occupy Mafia. ۔

Noreen Nazli's story is similar. Noreen is a resident of German Colony area of Orangi Town.

Noorin Nazli is also fighting her own case in the courts due to lack of lawyer's fees. According to Noorin, the court rules in her favor but various government agencies are obstructing its implementation.