Armament of the Raider X aircraft disclosed in images and diagrams 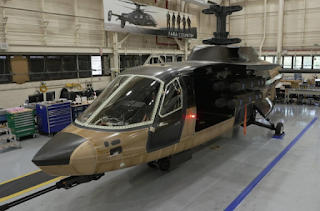 Lockheed Martin's Sikorsky introduced the Raider X recon helicopter in October 2019 for quick reconnaissance and strikes. The proposal competes with Boeing's 360 Invictus for the US Army's FARA programme. Sikorsky has 98% of the parts needed to finish the Raider, and the helicopter is 90% complete, according to Jay Macklin, head of development for Sikorsky Army Programs and Innovations.

Sikorsky's work is based on the S-97 Raider and X2. The Raider X is a coaxial, counter-rotating rotorcraft with a rear-mounted propeller. This link will power the General Electric T901-GE-900 (GE3000) turboshaft engine, limiting the Radier X's speed, altitude, and manoeuvrability.

at July 03, 2022
Email ThisBlogThis!Share to TwitterShare to FacebookShare to Pinterest
Labels: General, helicopters