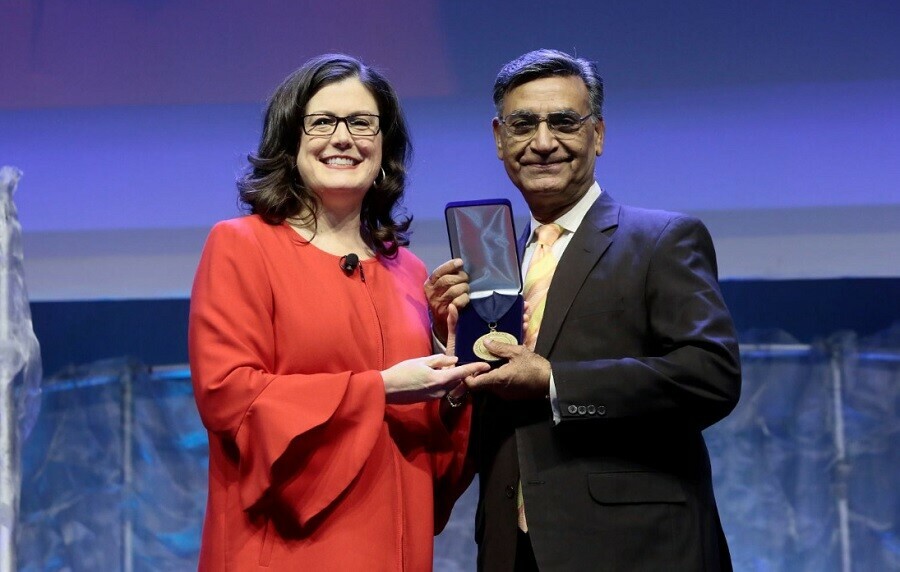 Dr. Abdul Latif Sheikh, a Pakistani pharmacist who received the world's largest pharmacy award "Donald Frankie Medal Award" from the American Society of Health System Pharmacists, says that the annual deaths due to medication errors in the United States are two and a half million, while in Pakistan one A conservative estimate of the death toll is 35,000 to 45,000, but the actual death toll could be much higher. He said that 5 billion dollars are lost annually due to incorrect use of medicines and mistakes.

What is the Donald Frankie Medal Award?

The Donald Frankie Medal Award is given to pharmacists who have made outstanding contributions to the field of pharmacy, this award was issued in 1971 in recognition of the services of the famous American pharmacist Donald E. Frankie.

Dr. Abdul Latif Shaikh studied pharmacy from USA after B.Pharmacy from Panjab University. He has also been a consultant to the Department of Pharmacy at the World Health Organization.

In a special conversation with Sama Digital on the occasion of Watan Aziz's 75th birthday, Dr. Abdul Latif Sheikh said that this award was not given to him personally but to Pakistan, but he will consider himself the rightful one when The government and non-government hospitals of the country will provide pharmacy facilities like the most developed countries of the world.

He said that 8 to 25 percent of medicines are used in wrong ways in hospitals, which leads to medication errors and 2 to 33 percent of medicines used at home level have some kind of error. Hopkins University is one of the best universities in the world. According to their research, 250,000 deaths occur due to medication errors in the United States alone.

Eminent pharmacists said that there are different estimates in this regard in Pakistan because we do not have any system to report medication errors, but it is estimated that 35 to 45 thousand deaths occur due to medication errors in Pakistan every year. "My personal opinion is that these deaths due to mistakes are a conservative estimate which would be much higher," he said.

He said that the cost of medicines due to medication errors is also a big problem, globally, 5 billion dollars are lost annually due to improper use of medicines.

Dr. Abdul Latif Shaikh says that the use of medicines is a very important and broad topic, mistakes in the use of medicines can happen at any stage, when the doctor is writing the prescription, there is a possibility of mistakes. There can also be time, it can be anywhere from transportation to retail stores and then from the store to the hospital and home.

He said that such a system should be designed so that there is no such mistake in any respect, the appointment of pharmacists in hospitals and medical stores will solve many problems, because doctors often write their prescriptions in a script that nurses and The untrained staff at the medical store do not understand and dispense drugs by guesswork, which often prove fatal, requiring computerization of prescriptions.

Dr. Abdul Latif Shaikh further said that if pharmacists are removed from our system, it can be said with certainty that the use of medicines in this society cannot be done properly because pharmacists play a key role regarding medicines, if you If the key role is removed, then only medicines can be sold and they cannot be used properly and better.

He said that pharmacists play a very important role in any health care system in the world, they are directly related to patients, physicians and health care workers, the main goal is to be a member of this team. To ensure that whatever medicine the patient uses is beneficial to the patient, to inform the patient about the side effects of the medicine, the patient's recovery is quick and he/she recovers.