Samsung has released two foldable phones with the third generation and updated technology of the Galaxy Z, which, despite what some reports said, has a lower megapixel camera. This means that customers no longer have to wait as long.

There were rumors that Samsung might put a 108-megapixel camera in the foldable Galaxy phones, but that didn't happen. Instead, the main cameras of both phones are still 50-megapixels, even though the company says it has improved the technology. provided with 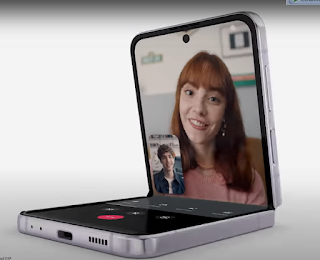 The phone has two cameras on the front, one with 4 megapixels inside the screen and the other with 10 megapixels outside the camera.

The phone's screen is equipped with cutting-edge technology and features that prevent the screen from rotating when the phone is moved around.

The phone boasts a 4400mAh battery and a fingerprint sensor on the side, as well as support for 25W wired and 15W wireless charging.

Although the cost of this phone has not been disclosed, estimates indicate that it could reach 1800 US dollars, or more than 4 lakh Pakistani rupees.

When opened like a tablet, this phone's 6.7-inch display screen enlarges to seven inches.

The back of the Z4 Flip has two cameras, each of which is 12 megapixels and has better wide- and macro-angle technologies.

It only has a single 10-megapixel front camera, unlike other Z series phones.

The manufacturer offers this phone in two distinct memory and RAM module configurations, ranging from 128 to 256 GB.

The Galaxy Z4 Flip's 3700 mAh battery is also smaller, although it comes with a 25 MW charger and support for a 10 MW wireless charger.

According to sources, it includes a fingerprint sensor on the side and is priced at 1000 US dollars, which is equivalent to 220000 Pakistani rupees.