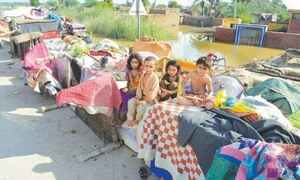 Describing the situation in the flood-affected areas of the province as 'very critical', senior health experts from various non-governmental organizations have said that most of the areas with limited access to drinking water and food are in the grip of water-borne infections, which These include severe diarrhoea, cholera, typhoid and skin diseases.

According to the report of Dawn newspaper, experts reminded that diarrhea infections have been increasing in Sindh since March this year and the disastrous rains have made the health challenges more serious.

Data from the provincial health department shows that 193,48 cases of diarrhea and dysentery among children were reported in Sindh in August alone, which is the highest number so far this year, compared to 117,000 in July. 999 cases were reported.

Pakistan Medical Association Sindh Chapter Head Dr. Usman Mako said that the relief efforts of the government are nothing but an oversight and most of the people still do not have access to clean drinking water and food if they are not provided with immediate assistance. If left, they will die of hunger and disease.

Dr. Usman Mako, who managed to evacuate his family from Sukkur before the floods hit his hometown, said many people, including his family, had lost their homes while other places were under 2 to 3 feet of water. Is.

He further said that there is hardly any dry place to take shelter, people do not know how to get water, diseases like gastroenteritis are spreading rapidly, which is affecting the population especially children badly.

He said that the devastation was massive and a few NGOs could not do justice to the work, only the government and the army could reach the areas cut off by the flood waters.

He further said that our teams are working in several districts and they are telling us that many people are waiting for help in the areas away from the flooded roads, which are affected by the spread of several diseases including gastroenteritis. .

Dr. Abdullah Muttaqi of the Pakistan Islamic Medical Association (PIMA) said the situation in the flood-affected areas was "extremely bad" and could worsen.

He emphasized the need for immediate medical treatment and prevention of diseases in flood-affected areas and said that fever is common and we cannot rule out the possibility of dengue or malaria, several cases of snake bite have also come before our teams.