A large black hole appeared near the solar system 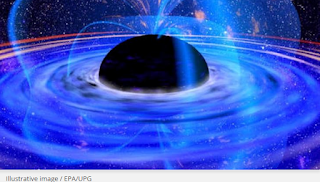 University of Alabama astronomers have reported the discovery of a black hole that is 1,545 light-years away from our solar system. The object's stellar mass is 12 times greater than the Sun's mass. Compared to other known black holes, it is much closer. Arxiv.org has reported this.

A system that featured a star from the spectral class main sequence orbiting an unobservable object in an eccentric orbit with a period of 185 days caught the attention of experts. It was determined that the star in the system is the only source of radiation thanks to the spectral energy distribution. It is 7.1 billion years old plus or minus 3.8 billion. It was a component of a ternary system that centered on two massive stars that eventually formed black holes or fused to form a single, enormous black hole.

There were previously one million such systems in the Milky Way. Binary systems contain black holes, which are clearly visible. Particularly when they begin to consume a nearby star and then emit X-rays