In France, Toyota and Peugeot were stolen using a wireless speaker

Car thieves come up with new and inventive ways to steal other people's cars every day. 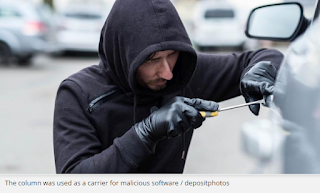 Some contemporary safety features in automobiles have rather commonplace weaknesses. Thus, two car thieves were recently apprehended in France by the police after they attempted to steal a vehicle using a Bluetooth speaker from the American company JBL, albeit a slightly improved one.

During a search of a stolen Peugeot 2008, a peculiar column with a quick-access software key embroidered inside was found. A universal "key" for breaking into cars can be purchased on the black market for just $5,000, according to further investigation by the police.

A YouTube video detailing how to use this device is also included with the revised column. In addition to Peugeot cars, such a key can also break the security of Toyota and Lexus cars. At the same time, car thieves need a little less than a minute for the entire procedure of opening the lock. Hacking occurs when the speaker is connected to the car's multimedia system via a USB cable.