Motorola Razr is unlucky that the Galaxy Z Flip4 exists

The Motorola Razr with a folding screen from 2020 will get a successor. 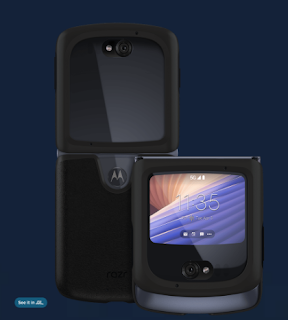 Foldable phones haven't exactly taken over the world just yet. Although they have been available for about three years.

The choice isn't huge either. You can buy a Samsung Galaxy Z Fold or a Z Flip, but that means the biggest competitors for Lenovo's Motorola Razr have been mentioned.

Therefore, Lenovo must make its folding phone distinctive and position it competitively in the market. The Motorola Razr is undoubtedly associated with its name. When it first came out as a flip phone in the new millennium, the Motorola Razr created a stir. Back then, it had a physical keyboard and a screen above the hinge but no folding screen. Therefore, it makes sense that the brand name came back when folding phones started to gain some traction.

The new design can also be folded lengthwise. The phone's internal screen measures 6.7 inches. It is a little wider when compared to its principal rival, the Z Flip4. That is much nicer. Additionally, the fold is hardly visible. The phone does have an unattractive edge all the way around the screen.

The Motorola Razr also has a slightly wobbly hinge. You can fold the screen in multiple positions, but it doesn't feel very sturdy.

The phone's screen measures 2.7 inches when folded. Compared to the Galaxy Z Flip4's smaller screen, that is significantly larger (1.9 inches). That increases its usefulness significantly. With it, you can open any app, allowing you to reply to messages without opening them. That's a bit of tinkering. On it, you can even watch YouTube videos.

Cameras are ok, not great

We are now a little more accustomed to phones costing more than 1,000 euros in the camera industry. The Razr lacks a zoom lens but does have a standard lens with 50 megapixels and a wide-angle lens with 13 megapixels. However, the macro mode allows for close-up photography.

By the way, the photos are of varying quality. The results are typically satisfactory in good lighting, but occasionally in low lighting details are lost due to slow autofocus. Sometimes colors are also oversaturated to the point where the evening sky is also a bright blue.

Particularly given how inadequate the digital zoom is, the zoom lens is a loss. You can zoom in up to eight times with this, but since the images are so grainy, it is best to avoid doing so in practice.

Therefore, you wouldn't purchase the Razr 2022 for its cameras. You purchase a folding phone because, as advertised, it folds. When the phone is folded, the small screen is useful, and the wider screen is great for typing. Overall, it is a fantastic Android phone with a great screen and a quick processor that lets you use all the apps you want without experiencing any issues.

In principle, you can use it for a number of years ahead. That is, if you settle for just two Android updates and three years worth of security updates.

The Motorola Razr costs at least 100 euros more than Samsung's Galaxy Z Flip4. Additionally, it has a stronger hinge and slightly improved cameras, making it better finished overall. Since folding phones are still relatively new, the true enthusiasts are willing to pay more. However, you can get a better phone with a flat screen for the same amount of money. The market for folding phones will probably continue to be a niche until that changes.