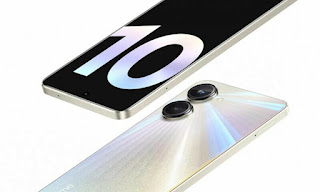 The mobile company claims to introduce 'Realme 10 Pro' and 'Realme 10 Pro Plus' with advanced camera software including upgraded technology, processor and chip.

The company has made this phone 7. Offered with a 6-inch AMOLED screen and its colors and panels, including its touch screen, are also claimed to be further improved with modern and fast technology.

A 16-megapixel selfie camera has been given on the front of the phone and it also has other features including fingerprint sensors.

According to the company, powerful processors have been given in the phones - Photo: The company
continues to write

This phone is also 72. Offered with a 6-inch screen and a 108-megapixel main camera.

It has a Snapdragon 695 chip and this phone is also offered in slim design and extremely low weight.

This phone has also been introduced with a 5,000 mAh battery and a 53-watt fast charger.

Two cameras have been given on the back of the phone, out of which the main camera is 108 megapixels and the second camera is 2 megapixels and samsung camera technology has been introduced in the cameras of this phone.

Both phones are offered with android 13's operating system and 5G support has also been given in 10 Pro.

Both phones have initially been offered for sale only in China, but they are likely to be offered soon in other Asian countries, including Pakistan.