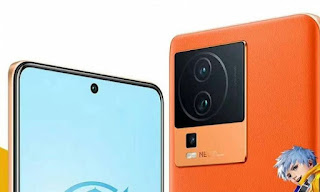 Chinese company Vivo introduced its new phone 'IQOO New 7' with a powerful battery and fast charging, which the company claims can be fully charged in just 15 minutes.

Vivo IQOO New 7 to 7. It is offered with a 6-inch screen and three back cameras, while a selfie camera.

The company claims that by upgrading the camera technology, it has been given the features of sony camera, while it has also included many features of artificial intelligence (AI).

On the back of the phone, the main camera is 50 megapixels, the second 8 megapixels and the third 2 megapixel camera.

Vivo IQOO New 7 has a 16-megapixel selfie camera on the front, the company claims that the phone's cameras have features to make the best quality videos even in low light times.

The phone has a MediaTek Demensity 9000 chip while Octacore's CPU has been given and it has the operating system of Origin Ocean with Android 13.

The phone also has other features including fingerprint sensors, while it has been offered in 8 and 12 GB RAM and various memory modules.

The phone has a 5,000 mAh battery and a 120-watt fast charger, which the company claims can charge the phone from zero to 100 percent in just 15 minutes.

The phone has initially been offered only in China, but it will soon be introduced in other countries as well