Las Vegas: Many companies have jumped into the smartwatch race and now The Citizen Company has announced its CZ smart watch, which uses NASA's technology that shows the process of fatigue or fatigue of astronauts.

Earlier, citizen's first smartwatch had failed miserably. Now Citizen has announced to present its second 'CZ Smartwatch' at the Consumer Electronics Show next month. In this, ibm's Watson supercomputer and the company's app can be used to find out the physical condition of the wearer. In particular, this technology can be useful for drivers because it will be able to report human fatigue, or their alertness. 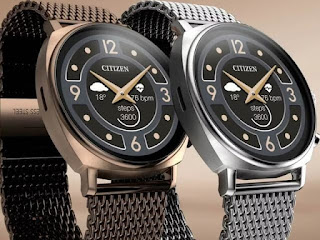 The smartwatch can describe different levels of fatigue or freshness, similar to NASA's Psychomotor Vigilance Task Test (PVT Plus). NASA is still using this technology for astronauts. The smartwatch has one GB of RAM and 8 GB of storage while the Snapdragon 4100 Place processor is installed.

Citizen will release two versions of the smartwatch that include the sports version along with the normal version. However, both screens have a 1.3-inch OLED display. However, these smartwatches are very beautifully designed.